With my 2018 book challenge complete I am trying to not sit on my laurels and continue reading as much as I can. So with that in mind I picked up Crossfire by Matthew Farrer. This book showcases a different side to 40k and I was excited to jump into it. 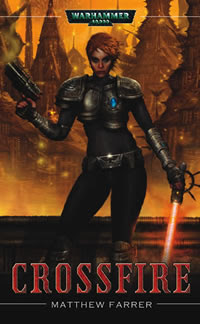 Commercial Fluff: The busting dockyards in the Hydraphur system are home to the mighty Imperial warfleets. They dock, repair, rearm and depart in an endless cycle of war. But even in this heart of imperial space, conflict exists. A great religious festival provides the perfect catalyst for civil unrest, political intrigue and murder in the vast Hive cities. Newly arrived Arbites officer, Shira Calpurnia finds herself in the thick of the action when she becomes the target of a series of assassination attempts. Coping with corruption and betrayal from within the ranks of the Arbites, Shira must discover who is trying to kill her before civil unrest turns to all out heresy. Caught in the crossfire, can she survive the intrigues of the ancient and callous aristocracy of this vital naval base?

I had tried reading this book a few years ago and had never finished it. So I decided to dust it off and give it another go. Unlike most of the 40k novels this doesn't involve a war or aliens or even Space Marines. This book instead follows Shira Calpurnia an Adeptus Arbitors (ie a Police/detective) and the story starts with her arrival on the planet of Hydraphur. This story is very much a detective novel, with new clues being discovered every chapter until the final reveal.

We are treated by the author to a great female lead and an impressive opening couple of chapters (I especially loved the descriptions of the chapels and shrines of the different Adeptus), but as the story continues it seems to lose momentum. Soon we are jumping from scene to scene chasing down a plot that has lost it way. Though it had a strong start I can now see why I didn't finish it the first time. But I am glad I continued to the end.

Overall a solid read. Not my favourite due to the slow pace. I am happy to have finished it and I am sure I will attempt the other tales in the series.