Well that didn't take long! In less than a week I completed book Seventeen of my Books of 2018 challenge. Now was it because it was a epic book or a short read? Guess we need to look at the stats first: 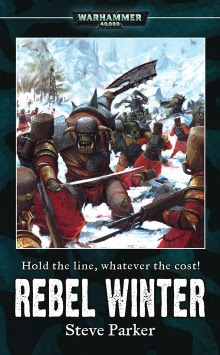 Title: Rebel Winter
Author: Steve Parker
Publisher: Black Library
Format: Paperback
Page Count:
Commercial Fluff: On the brutal battlefields of the 41st Millennium, the life of an Imperial Guardsman is harsh and short. On the snowy wastes of Danik's World, a regiment of Vostroyans is ordered to hold their ground to protect the retreat of other Imperial forces. When their own orders come to move back, they discover they have been stranded behind enemy lines. Cold, hungry and running out of supplies, trapped between rebel forces and hordes of orks, can the Guardsmen ever fight their way back to safety?

This book I discovered in my Mum's house after a resent visit back home. I remember buying it way back in the day because I wanted a Vostroyan army for 40k. For those not familiar with 40k: Vostroyans are an Imperial Guard force from the setting of Warhammer 40k. They hail from a factory world (imagine no grass, just factory after factory) and they specialise in urban warfare and have a lot of similar qualities to Eastern Europe and Russian culture. Now lift all those qualities and throw them on a world suffering from a never ending winter, due to volcano eruptions. These guys are not in their comfort zone.

The story beings in a Courtroom with the main character on trial following his latest military campaign. Through this character's memories we are then transported back to the campaign to experience it first hand. We learn of how this once populous world suffered a natural disaster that plunged it into the never ending winter. We also find out that due to a lack of aid, there was a military coup that has lead to this war. Here enters the Vostroyans, believing themselves to be superior they land planetside to crush the coup. Only problem is the rebels retreat north forcing the Vostroyans to begin a war of occupation. Slowly as the war grinds on the Vostroyans spread further out securing abandoned towns and looking after refugees. It is at this point a new foe enters the war, mankind's oldest enemy Orks. Throughout the book it is hinted whether the Orks arrived by chance or did the rebels invite them? Either way it doesn't really matter as the story progresses the Orks become more of a background occupational hazard. The Vostroyans themselves are well rounded characters but with there being a whole company of them it is hard to truly care for them and you ultimately end up worrying about only three or four of them.

In a classic war/action adventure the Vostroyan Company is cut off and must fight it's way across an unforgiving landscape hounded by Orks and rebels. We meet characters and then watch them die, we experience heroic levels of bravery on one page then never hear of a character again. Overall a few negatives but I did enjoy this book, hence why I finished it so fast. Ultimately it felt like an intro novel and the ending left the tale unfinished. How does the war end? Why are the Orks there? Why is the ********* so creepy? What happened next to the survivors?

Unfortunately it seems like we never find out as eleven years have passed with no follow up.

This book is the perfect train read and I recommend to fans of 40k. Especially Vostroyan fans. Next on my reading list: The Light Fantastic by Terry Pratchett.

Also if you use it I have started up on Good Reads so join me over there: Beers with Peps

As always thanks for reading this. 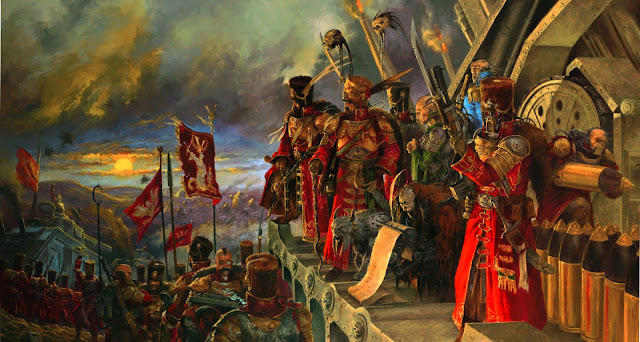 Posted by Adventures with Peps at September 16, 2018