Welcome to September! Now the summer holidays are over and the children are heading back to school. Soon leaves will change to Orange and my favourite season will be upon us Autumn. I was lucky enough to enjoy a quick weekend break recently, during this time I was able to finish book sixteen in my Books of 2018!

Unsurprisingly I am delving into the Grim Dark worlds of 40k. It's just a franchise I really enjoy, be it the sci-fi or just the wide scope for adventure it just works. So without further ado let us jump in: 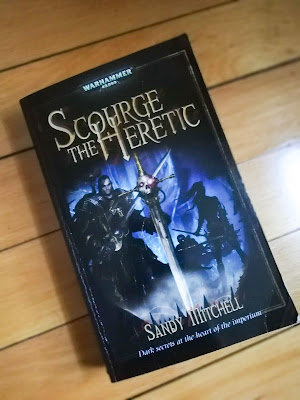 When an Ordo Hereticus warband is sent to investigate an inter-planetary people-trafficking operation, they soon find something much more sinister than people being smuggled…

So let's begin with some basics. This tale is set-up in a sector of the galaxy known as Calixis. Those who are new to 40k may not know about it, but it is an area designed purely for the 40K roleplaying game Dark Heresy (a now defunked Fantasy Flight Game). The idea behind the game was to be a character who worked as a henchmen for a powerful inquisitor. Here enters this book.

The way the story is written and portrayed is almost like a game written up into fan fiction. The team (aka player characters) are sent in to investigate a smuggling ring and as they discover more, the more the story unfolds. What should be a straight go in and bust the bad guys suddenly becomes a full on detective series that could span the entire sector.

The cast of characters is the classic character archetypes: A Psychic (Wizard), An Arbite (Leader Warrior), Two Guardsmen (archer and Barbarian), Assassin (Rogue) and a Techpriest (Priest), led by an all powerful Inquisitor (NPC). As the story progresses we get weird love stories, backgrounds and and some pretty well thought out characters.

The planet the adventure is set on is the best part for me. I love the idea of deep mines that a mutant population work over, a population prone to psykers, a military prison under attack and rich nobles lording it over everyone in their noble household made of glass to make the most of the weak sunlight.

Throughout the book there are hints of bigger plots and sinister villains and we are left with a story designed to be spread over at least one or two more books. With a pretty open ending we are left wondering what will happen next, unfortunately the second book is extremely hard to find. Overall an okay read that can lead you to a lot of fun playing Dark Heresy and I hope to one day find the second book.
Posted by Adventures with Peps at September 08, 2018