So my bad. Haven't reviewed a beer since July. Don't worry though as I have been drinking plenty. I could make lame promises of posting more but I feel that would be a lie. I need time to post as well as being in the right frame of mind. So until that becomes more readily available we will have to make do with random batch blogging.

Now back to the beer. I recently travelled to Albany NY state and came across Oliver's Beverage. Now this place is well worth a visit and had a crazy amount of beers on it shelves. After a good hour of walking and looking I settled on buying a load of Mikkeller and Evil Twin beers. So for a little while the beer reviews will be all about these breweries. 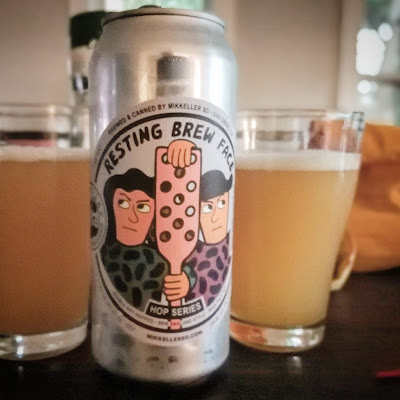 Name: Resting Brew Face
Style: NEDIPA ( New England Double India Pale Ale).
Brewery: Mikkeller San Diego
Country: USA San Diego
ABV: 9%
Commercial Fluff: "RBF was created to be a reflection of the epitome of New England style IPA’s. Without the use of any bittering hops, the beer’s juicy hop aroma prominently features sweet, tropical melon characteristics that are supported well by a slightly robust body.  This particular batch finally reached it's proper gravity so expect the deliciousness of past batches but with an extra kick."

Label: Henry and Sally have the perfect faces going on. It is a great label perfect for the beer name.
Pour: Thick, orange, full white head. Looks chewy.
Aroma: Tropical juice bomb, peach, pineapple, guava. So much fruit.
Taste: Sweet, orange peel, grapefruit, pineapple. Quite bitter finish.
Would I buy it again: Yes! This was a great beer, if I knew how good it was going to be I would have bought more than can. One to look out for.
Posted by Adventures with Peps at September 16, 2018