Wow it's a steamy, hot, humid day here in the Ottawa capital, last night was Canada Day and temperatures sored! What it meant for me was the ability to finish book twelve of my Books of 2018. As the recurring theme continues I have completed a sci-fi novel, set in the Warhammer 40k Universe, written by one of my favourite authors Gav Thorpe. Gav Thorpe along with Dan Abnett have a unique ability to bring these worlds to life for me and help me escape my own for a while. So let us jump into an early title of Mr. Thorpes. 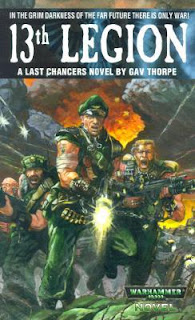 Commercial Fluff: Across a hundred blasted war-zones, upon a dozen bloody worlds, the convict soldiers of the Thirteenth Legion fight a desperate battle for redemption in the eyes of the immortal Emperor. In this endless war against savage orks, merciless eldar and the insidious threat of Chaos, Kage and the Last Chancers penal battalion must fight not only to win but to survive!

Even for the grim, dark future of 40k, this book is grim, dark! No noble one dimensioned Space Marines here or even a lovable rogue of the Imperial Guard. Instead we follow a bunch of murders, traitors and scum of the 13th Penal Legion, lead into battle by Colonel Schaeffer. Throughout the tale we see them fight aliens and then each other, as their only true friend is themselves. You'll even at times find yourself rooting for an alien to off certain characters, but I feel that was what the author wants you to feel. But ultimately they aren't all bad and you start to even like some of them for a bit, that is until you are reminded that they are murderous criminals, who don't deserve the Emperors forgiveness.

This story has a great base, a penal legion lead by a zealous commander who would rather see his chargers dead than given a pardon. Think Dirty Dozen and you aren't far off. The author is also given the freedom to play with characters from many different backgrounds, as the legion is collected up from different prison worlds scattered throughout this sector. This leads to interesting array of characters, be them nobles, hive scum or even genetically modified soldiers. The story itself is written from the viewpoint of a Lt. Kage; a hardass Hive Worlder who murdered his way into the Penal Legion and refuses to die in a suicide mission. It is though his telling of events that we learn the 13th legion fought in the Second Tyrannic War. It is also hinted that the legion consisted of close to 4,000 troops at the start, but by the time of this tale only 250 are left and most of those are now mentally unhinged. 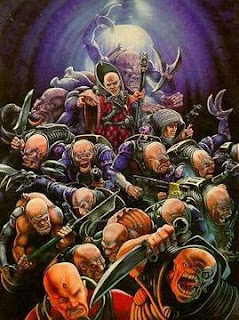 Once settled into the main cast of characters we are bouncing to flavorful warzone to flavourful warzone, watching the bodycount rise until we are only left with 12 members. It is then disclosed that all the fighting and suicide missions was organized by the Inquisition, in order to find the most badass troops out there. It is also now that we discover their final mission. Infiltrate and destroy the City of Coritanorum. This once proud Imperial Held city, has fallen to an insidious control of a Genestealer Cult! I don't want to ruin the ending so go grab a copy and read for yourself.

Overall a great read. I really enjoyed the detailed fight scenes and unusual locations we got to visit through the story. The interactions between cell mates, seemed realistic and not forced and the final twist at the end though expected was well worth the wait (you'll see). It's also worth mentioning that it is great to see how far Gav Thorpe's writing has come since this time. I actually enjoyed the book so much that I have begun the next book in the series Kill team - which concern sneaky Tau!

Until next time.
Posted by Adventures with Peps at July 02, 2018