Attempting to get better at posting beer reviews and more content in general. With that in mind here is this week's entry for the blog. Keeping things Canada this week with an offering from Wellington Brewery discovered in the local LCBO. Let us dive in: 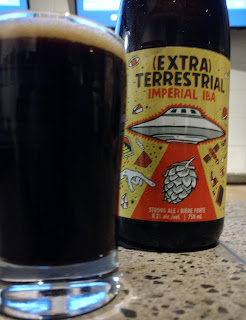 Name: (Extra) Terrestrial Imperial Brown Ale.
Style: Imperial Brown Ale
Brewery: Wellington Brewery
Country: Guelph, Ontario, Canada
ABV: 8.2%
Commercial Fluff:
From the depths of outer space, comes an (Extra) Terrestrial, a heavily fortified imperial brown ale with a maximum payload of american hops. We’ve taken our award-winning recipe for Terrestrial India Brown Ale and made it double, using twice as much roasted malts and more than enough bitterness to satisfy the most discerning hop-heads. This imperial brown ale clocks in at over 90 IBU, dry hopped to create an intense flavour supernova of citrus and lemon. You can’t escape this black hole of hops!

Pour: The pour is super dark, you would think it black. After further inspection it is a very dark brown. The head is pretty small producing tight bubbles of a light tan colour, it ultimately dissipates quickly.
Aroma: Lots of caramel, herby, earthy notes and a good helping of chocolate.
Taste: Not as sweet as I had expected. Throughout there are flavours of caramel, dark fruits like raisins, dark chocolate and earthy notes. The earthiness really help balance out the sweeter notes.
Would I buy it again? No. Ultimately there is nothing wrong with this beer, I'm in fact very glad I tried it. There is just no real draw for me. I think I prefer my brown ales in the lower abv's so that I can enjoy a few. The flavour though interesting wouldn't have me reaching for another bottle.

What are your thoughts? Let me know either on here, facebook or google+ (yes I still use that). As always thanks for reading.
Posted by Adventures with Peps at July 09, 2018