Book Review 26 // Sea of Sorrows by James A. Moore

As mentioned in yesterday's post I am back from my holidays and attempting to catch up on some blogging. The joy of holidays away is getting some much needed reading completed. So not only did I complete the Praetorian of Dorn, I also managed the third book in the Alien series. If you haven't seen the other reviews follow these handy links-


What this does mean is that I am now at book Eleven of Eighteen for my Books of 2018! Seven books to go to complete my challenge and six months to complete it by. With that in mind let's jump into this review. 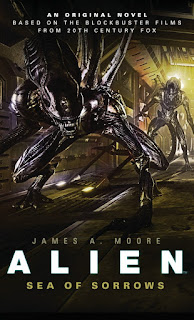 Commercial Fluff: "As a deputy commissioner for the ICC, Alan Decker’s job is to make sure the settlements on LV178 follow all the rules, keeping the colonists safe. But the planet known as New Galveston holds secrets, lurking deep beneath the toxic sands dubbed the Sea of Sorrows.

The Weyland-Yutani Corporation has secrets of its own, as Decker discovers when he is forced to join a team of mercenaries sent to investigate an ancient excavation. Somewhere in that long-forgotten dig lies the thing the company wants most in the universe—a living Xenomorph. Decker doesn’t understand why they need him, until his own past comes back to haunt him. Centuries ago, his ancestor fought the Aliens, launching a bloody vendetta that was never satisfied. That was when the creatures swore revenge on the Destroyer…Ellen Ripley."


For those who don't know the series Sea of Sorrows is a sequel to Tim Lebbon's opening novel Alien: Out of the Shadows. The tale happens roughly 300 years later in the Alien timeline. Early on in the story we get introduced to Decker, a descendent of Ellen Ripley (yes the movie heroine). It is also revelled early on that this hive of Xenomorphs can detect his dna and his link to Ripley. Making him a prime target whenever they attack. Expect why me!? and it's coming straight at me!

Overall the story is really good. Action scenes are spread out and well paced (an issue with some Alien Novels). Whilst once again Weyland-Yutani is the real villain of the piece as they continue to attempt to capture one of these foul beasts. The cast of characters is large and I do find myself not caring when they start getting killed off. Only a few of the side characters get any real background info delivered about them so it is hard to care, but if they all got page time then this tale would be longer than Lord of the Rings!

The ending seems to arrive nicely packaged and wrapped in bow. The events of this book ultimately will be covered up and one day forgotten (a bit like me) by Weyland-Yutani. Unfortunately for me it left to many unanswered questions. Why did the ship crash there? Why were these aliens collecting Xenomorphs? How can they remember Ripley's genes? How could the company forget they once had resources in that system? Is it the planet seen in Alien: Covenant?

If you are an Alien fan and want a bit of a mindless read then this book is for you. If you have read it drop me some comments.
Posted by Adventures with Peps at June 05, 2018