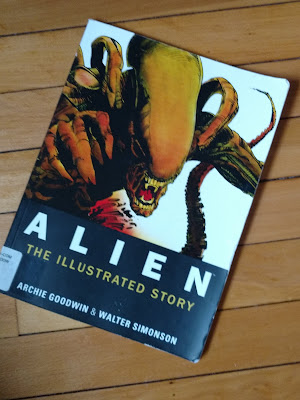 I'm on a real Alien kick at the moment. Having reviewed a few comics now alongside a few books too. So whilst I was returning Alien: Salvation I was happy to stumble across this classic piece of graphic novel history Alien: The Illustrated Story- believed by many to be the best movie to comic adaption ever made. So guess what, I picked it up and read it like a madman. So let us jump in!

And when the silence is broken... the crew of the Nostromo must grapple with a terrifying life force they cannot leash, nor even comprehend - the Alien!

Wow what a great read it does live up to the hype. If the film had not been made and instead just existed as this graphic novel I would be raving about how great this is. As it stands it helps boost your knowledge of what you saw in the film, it even helps improve roles like Ripley as the warrant officer and allows time to absorb some of the technical jargon that would otherwise get skipped in a film.

Since being old enough I have maybe watched Alien a hundred plus times and I never get sick of watching it. It is a film that you know what is going to happen but you can't turn away. You build a bond to each character and then you are forced to watch the xenomorph kill them and take them into the darkness. It is a film about humans surviving in the harshness of space, friendships built within a confined space, strong female leads and the need to overcome the fear of the dark. All this is beautifully portrayed within this comic by Goodwin's writing.

Simonson's artwork though dated by today's standards is beautiful (try to find the uncoloured edition for a real treat). Everything has purpose, be it movement, from the smoke and wind effects used on the planet's surface or the way the chestbuster escapes Kane's torso on the kitchen table. No detail is left poorly used. Then add in great ink work and the story comes to life again and we are forced to relive poor Dallas' demise in the air duct, scene by scene.

Seriously go buy/borrow this book you will not be disappointed and it will reinvigorate your love of the franchise.
Posted by Adventures with Peps at May 01, 2018