Welcome to another S102 update. This time we are venturing to shady back alleys and visiting the local Shuggy Hall 'Angles'. Enjoy and drop me a comment below.

"Welcome friends to Angles. The best damn Shuggy Hall this side of Sector 13. All the big time players have played here, even that pin-stripe freak Max Normal. Once saw that guy do the Booglariser.....Whatcha mean you don't know what that is....Guess we best start with the basics. Follow me" - McManus Owner of Angles

The game of shuggy is played on an eight by four foot table with two cues, a lot of skill and 18 balls of varying colours-

The object of the game is relatively simple: score as many points as possible by sinking the balls into the pockets. Each table has ten pockets of various heights, making shuggy an easy game to play but a difficult one to master. 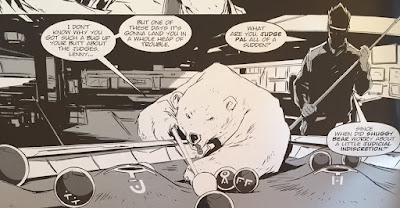 Shuggy is a very popular pastime in Mega-City One and like most popular pastimes, there are those who will use it for nefarious ends. Gambling is strictly prohibited in the city and, as such, the outcome of a match cannot be bet on or any other form of a wager placed. But this is Mega-City One and as a result billions of credits pass hands across the city on results of this game.

It is a well known fact that crime and shuggy go hand in hand. And it is a rare night that a shuggy hall won't be visited by Jays (Judges) at least once. Alongside the obvious gambling crimes, there are other illegal activities that stem from shuggy  and shuggy meeting places. Number running and loan sharking are two common forms of crimes happening in the darkened halls, and many a would be champion has wound up in Resyk thanks to a shark demanding payment. Mobs also are a frequent problem within the Shuggy system. Using them as a legitimate front for their illegal activities, with behind-the-scenes dealing going on that would land all present a long stretch in the cubes. Protection, prostitution and counterfeiting are common arrests for Judges in and around shuggy halls, with slab walkers out to make some easy creds from punters outside the halls, to those heavies who wish to offer that extra little incentive to those who have won big on the tables.

Many halls also have side rooms designed to hold illegal games of cards and bingo. But in some of the more seedier halls, down in the basement can be found Bite Pits. With custom sound dampening and scan-negating equipment installed. These Pits are scenes of pure carnage, as bite fighters will attempt to literally rip into each other with their razor sharp teeth. Naturally once found out, the law stamps down hard and shuggy halls disappear over night as Judges arrests all involve and demolish the building completely, 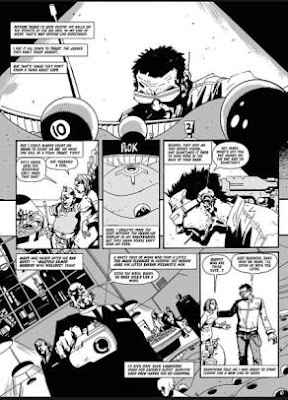 Ten Commandments- The Player will pot a ball in every pocket without missing a single one. This is a high scoring shot and many
The Booglariser- The hardest shot in the game to make, the Booglariser consists of potting every single ball on the table with a single shot. It is a very rare event when a shuggy player can pull off this incredible shot.

Brit-Cit- Shuggy is very popular in both Brit-Cit and on the Luna colony and both have provided world champions. The professional shuggy player can stand to make a vast amount of wealth if they are good at the sport, with the chance to win huge amounts of credits and trophies. Each year in Brit-Cit the Chalice is held. A major event sponsored by most of the leading shuggy table and equipment manufactures, the Chalice is the holy grail of shuggy and to win is to become wealthy.

Texas City- One of a number of shuggy variants is know as Southern Rules and originates from Texas City. Here the game is played on a slightly longer table and has 26 pockets instead of the normal ten. Each pocket is colour coded and numbered. With the highest numbered pocket being the most elevated one in the center of the table. But these rules are unpopular with the rest of the world and rarely played outside of Texas City.

Luna- The folks on the moon love their shuggy. But they have some strange ways of playing it. On Luna it is not uncommon for the shuggy hall owners to be involved with the Luna Mafia, or some other underworld society. The Luna Mafia controls almost every aspect of life on the Moon, and has sunk it's hooks into everything, from air and power supply to the Luna Justice Department itself. Luna shuggy is played much the same as regular shuggy but with a few distinct differences. the rules on Luna differ by each player getting only one shot on the table, no matter how many balls they sink. Needless to say, Luna players strive for excellence and mastery over their sport and will endeavor to out rank those from Earth and the other colonies. 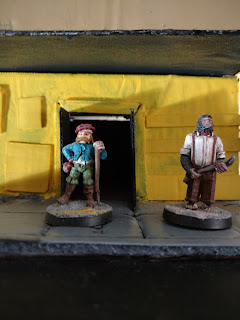 Want to use these characters in your games of JDMG? Well now you can here are the rules for two of my iconic characters of my own creation.

History: Hailing from Cal-Hab, Angles rose through the Shuggy Halls of the Northern Wastes. After turning professional Angles traveled to Brit-Cit and started climbing up the World Rankings. His career highlight (as he reached retirement) came when Angles faced off against Max Normal in the Hondo Open Finals. Angles ended up losing but with the winnings he retired and bought a Shuggy Hall in Sector 102. With 'Angles' open, the new Shuggy hall started attracting all the big names including Max Normal, whom has over the years become firm friends with Angles McManus.

Name: Pancakes Clydes
Job Title: Shuggy Hall Manager
Age: 32
Gender: Male
Race: Gorilla
History: After a brief period of running with the local Ape Gang Swamp Skunks, Pancakes wanted a better life and got hired as a bouncer for 'Angles'. Pancake slowly proved his worth and was soon working the bar inside. As Angles McManus grew older he slowly relied more and more on Pancakes until he finally decided to make Pancakes the manager. Under Pancakes rule the Shuggy Hall has prospered, with a mixed clientele of Apes and Humans 'Angles' is viewed as the most open minded bar in MC-1.

Thanks for reading.
Posted by Adventures with Peps at April 15, 2018