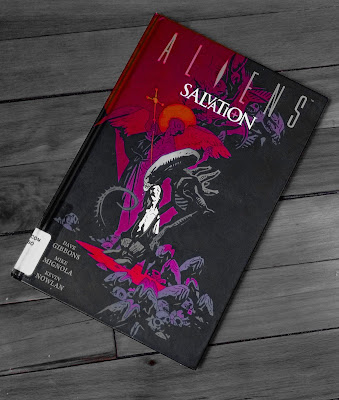 My quest for cheap comics continued this week as browsed through my local library and came across another great comic. Once again we delve into the Dark Horse Publishings Alien Franchise and discover what crazy shit the Aliens are getting up to now!

Commercial Fluff: MIGNOLA! GIBBONS! NOWLAN! One of the most memorable Aliens tales ever told, now available as a premier-edition hardcover! When the most pious crewman aboard the Nova Maru is forced to abandon ship with his mad captain, the two are marooned on an inhospitable and remote world-and they're not alone . . . *Back in print for the first time in over a decade!

The tale begins on board the Nova Maru a cargo ship carrying an unknown package across the universe. In an unexplained accident the cargo gets lose on board and a seriously injured and freaked out Captain Foss immediately abandons ship, forcing Selkirk- one of his crew members, at gunpoint to go along with him. Sealing the fate of the other crew members who are sadly never seen again and easily written off. 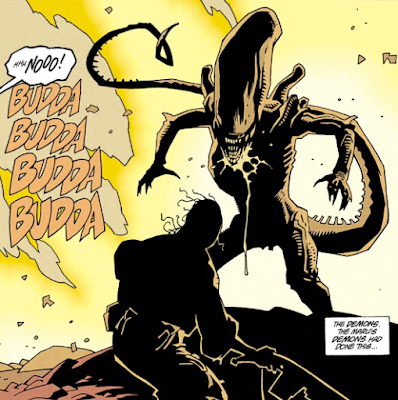 The two men then crash the escape shuttle on the nearby planet, where everything seems to want to kill humans or at the very least make them sick. The rest of the tale is more about Foss who is injured and mentally unstable and Selkirk, a god-fearing man. Soon with food scarce and Selkirk starving the unthinkable happens but I will leave you to discover that part. The story then follows Slekirk's need to survive and the 58 pages finishes pretty quickly.

The biggest issue with this tale is the shortness of it at 58 pages. The initial spaceship scenes are rushed and unfocused, much more time could have been spent on that and the disposable crew in general. I also felt the xenomorph were under played, they just weren't scary and there are scenes were they are slaughtered in droves. They became to much of a background character for this to be a true Alien comic.

Mignola's art is interesting, I understand why people love it and it does help the storytelling but for me I have to say I'm not a true fan, sometimes it felt cluttered whilst at other times it seemed bare and lacksture. It seems like a love hate relationship for me.

Regardless of the above negatives Aliens: Salvation brings me back to simpler days of Xenomorphs, when they could be anywhere ready to strike. A true representation of the darkness that humanity fears. Interesting use of religion through out and overall a good comic just needed more space to expand and explore and of course more scary aliens! 3 out of 5.
Posted by Adventures with Peps at April 30, 2018