Was browsing the comic section of the local library when I came across a hardback spine with Aliens written on it. Now as you may have seen I'm on a bit of an Alien spree (Out of the Shadows and River of Pain), so I due I had to sit down and read it. Lucky for me it is only 56 pages so devoured quicker than a colonist on LV426. Here are the details: 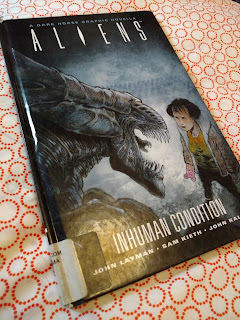 Commercial Fluff: On a distant, frozen world, "artificial persons" are manufactured in discreet seclusion. With formidable new security synthetics coming online, how better to test their mettle than against a hive of deadly xenomorphs? But as "socialization specialist" Jean DuPaul sees her ever-more-human android charges sent to their destruction, she learns that the most savage species in the universe is man. From writer John Layman, creator of the award-winning Chew, and acclaimed artist Sam Kieth comes Aliens: Inhuman Condition, a hardcover graphic novella from the pages of Dark Horse Presents that shines a dark, disturbing light on the Aliens universe.

Set after the first two motion pictures, we arrive on a frozen world where a factory of Artificial Humans co exists near an xenomorphs nest. Working at the factory is a disturbed Jean Dupaul a character tormented by her past xenomorph attack experience. Throughout the story the plot that is unveiled makes you question what/whom is true and what is a myth. I don't want to ruin the plot so I am trying to be as vague as possible; the tale is ultimately about a broken but strong woman dealing with her orderal and seeking revenge on a company that doesn't care about anyone. The Aliens are a second thought in this book and play more into the role of a bogeyman throughout.

For me the plot was interesting and was nice to see a damage character made stronger by the Aliens, instead of a gun ho hero like Ripley. The main struggle I had was the artwork. It made the whole story more child like and whimsical instead of moody and dark as was more fitting in my opinion.