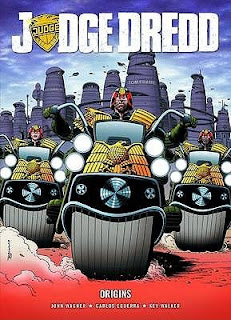 This tale begins with a rain soaked gang of muties infiltrating Mega-City One in order to deliver a package to the Grand Hall of Justice. Along the way they kill multiple victims gaining the attentions of Dredd. As Dredd pursues the gang of muties through Mega-City One he is hounded by recurring dreams of Chief Judge Fargo the founder of the Judge System and his clone brother Rico Dredd, both of whom are long since dead (Rico was actually killed by Dredd). This story is pretty interesting as you are dying to know what is in the damn box. Dredd seems old and tired (maybe due to the dreams) and the fact that it is constantly raining can't be a good sign. Nice opening story to wet the palette. 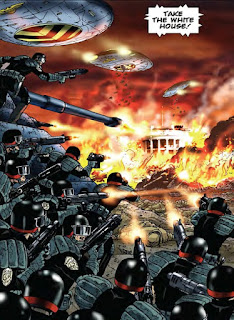 On to the Origins story. We join Dredd as he organizes a team of Judges to assist him on a mission into the Cursed Earth. It is revealed that the mutant's package contained a DNA sample of none other than Chief Judge Eustace Fargo the founding father of the Justice system along with a ransom demand for a billion credits in return for Fargo. To make matters even more mysterious the sample was took from a living person even though Fargo is believed to have died in 2051. As the team of Judges come to terms with the mission it is also revealed that Fargo's Tomb has always been empty and that the Judges have been lying to rookies for years...
Soon Dredd, the team and a truck full of credits head out into the Cursed Earth. Having barely travelled a day the team come across a scene of carnage. A helltrekker has been ambushed and young child taken, after some convincing Dredd splits the team and personally seeks out the missing child. This was to become the first of many mistakes. From here on in I won't spoil the story, but we get to discover the origins of the justice system, how exactly Fargo rose to power and the legacy left behind. We also discover that even Fargo is wasn't perfect and that the Justice System was built on misinformation and lies, but I will leave that for you to discover on your own. 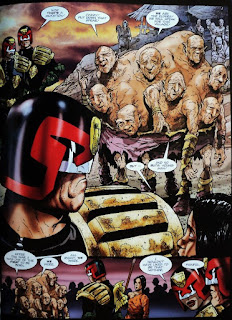 Overall this is a great story, John Wagner once again confirming that he is the one and only true Judge Dredd storyteller. The art by Carlos Ezquerra is also up to the usual high quality, though I am a fan of Henry Flint there is something about Ezquerra that just makes me warm and happy inside. What could have made it a 5 out of 5? To be honest I'm not sure. It lacked the epicness needed to push it through to a five (I hope that makes sense?).

What are your thoughts on this telling of the father of Justice? Drop me comment.
Posted by Adventures with Peps at April 10, 2018