I'm back! It's took a while due to me being distracted with work and my reading challenge, but I have finally picked up a comic and read it. So which franchise did I go with? Dredd of course... so head to the iso cubes and let us jump in. 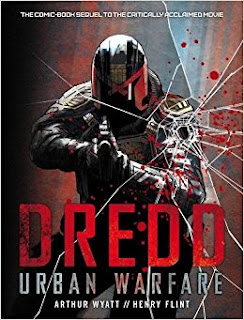 Made up of multiple stories the first two are Ma-Ma & Underbelly, I have already reviewed these (see here) so I will move onto Uprise.

This story is set in The Spit a strip of habitable land between two reclamation zones. Basically the structures of the old world that is slowly getting covered by the new. It's an area of high crime and even higher poverty. A place where the old world struggles to hang on whilst the mega corporations move in to build a fresh. The Judges of this area have lost the support of the locals and to make matters worse a rookies destroys the local leaders car leading to widespread riots.

As the riots spread throughout the area, Dredd arrives to lend a hand. But in classic Dreddverse story arc the local leader is assassinated by an unknown assassin and fake news is spread stating that he was hired by the Judges. Leading to the riots escalating further, soon the Judges are losing control and the call is made to bring in the robot auxiliaries.

This sets us up for the second half of the tale and as the story unfolds you see the manipulation of the justice systems and how the mega corp is organizing all the crimes and riots to bring about the fall of the Spit. Soon it is up to Dredd to find out the danger and save the Strip.

Nothing groundbreaking to the story it is pretty straight forward. What you do have is a tight storyline with a straight forward villain. The artwork is the true hero of the tale and I can't wait to see more of the Dredd movie comics soon. Solid read 3 out of 5.
Posted by Adventures with Peps at April 09, 2018