With surprising speed that amazed and shocked me, I have completed book seven for my Books of 2018. It is a journey back into the Aliens franchise (link to an earlier review), to the time period set 30+ years after the original film in the time that Ripley spent a sleep in her escape pod. Having enjoyed the previous book I was excited to read this and over the easter weekend was able to complete it at speed. So let us jump into the review. 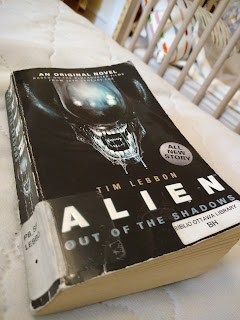 Title: Alien: Out of the Shadows

Commercial Fluff: As a child, Chris Hooper dreamed of monsters. But in deep space, he found only darkness and isolation. Then on planet LV178, he and his fellow miners discovered a storm-scoured, sand-blasted hell - and trimonite, the hardest material known to man.

When a shuttle crashed into the mining ship Marion, the miners learn that there was more than trimonite deep in the caverns. There was evil, hibernating - and waiting for suitable prey.

Hoop and his associates uncover a nest of Xenomorphs, and hell takes on new meaning. Quickly they discover that their only hope lies with the unlikeliest of saviors...

The start of the book is pretty actioned packed as we meet the heroes of the book. With their space station seriously damaged during a failed docking action. The crew are shocked to discover the second ship now attempting to dock is the home to three black insect like creatures that have seemingly eaten the miners of the planet below. As the small group of survivors take stock of the horrors unfolding around them a small lifecraft slowly moves towards them and docks. Revealing one crew member Ripley.


It’s fitting to throw Ripley into this mess, though very confusing how it was never mentioned in the second film (more on that later). The author did great work in showcasing Ripley's badass character and how damaged she is mentally after realising how much time has elapsed. It was also interesting to see the return of the android Ash, not in a physical form but as a manipulative code within the shuttles computers.

Soon Ripley is explaining how much shit the survivors are truly in, explaining what had happened to her crew and what to expect when they finally face the xenomorph threat. For me the story really comes to life when they have to venture down to the planet and discover the origins of the alien threat. I don't want to put in too many spoilers but expect tunnels, aliens, spaceships and alien ruins. As the ending approaches and the author takes an easy escape route and plays the memory wipe game, setting Ripley up to be found in the second movie with patchy memories and no remembrance of Hoop or the doomed LV-178.


Overall I really enjoyed this and finished the book in 4 days (new record for me). This book has made me realize I need to really expand my sci-fi reading and so I will be on the search for more of this Franchise.


Have you read this book? Let me know your thoughts.
Posted by Adventures with Peps at April 08, 2018