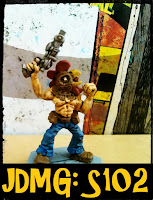 Welcome Dreddheads to another JDMG update. Today we look at Johnny Alpha, the top Bounty Hunter of the Strontium Dogs. 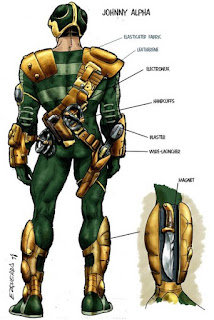 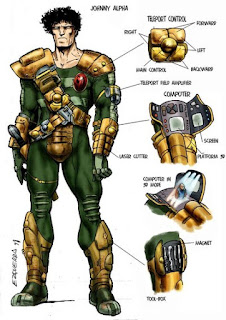 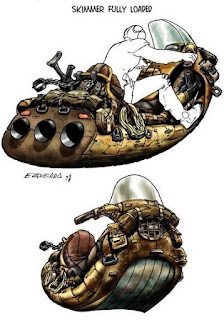 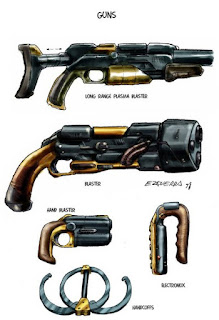 Known Background
The most famous and respected of the Strontium Dogs is Johnny Alpha, whose mutant eyes allow him to see through walls and read minds. He is responsible for such legendary achievements as destroying the Wolrog homeworld, leading the mutant uprising on Earth, and bringing Adolf Hitler to the future to face trial. His legendary career and his assistance to mutants in trouble - such as donating a large sum of money to the Milton Keynes ghetto - has made him an icon to Earth's mutants. He is a highly skilled and dangerous fighter, highly dogged bounty hunter, never giving up in the pursuit of his quarry.

He is the son of Nelson Bunker Kreelman, a bigoted politician who drafted the anti-mutant laws and gained power on the back of bigotry. Despised, abused and hidden away by his father, Johnny escaped at a young age and joined the Mutant Army, becoming one of its key leaders by age 17 and playing a major part in the mutant uprising of 2167. He never revealed the identity of his father, changing his name from Kreelman to Alpha.

Weapons/Abilities
Like all Search/Destroy agents, Alpha is armed with highly advanced technology including a variable-cartridge blaster, electrified brass knuckles, a short-range teleporter, a "time drogue" that can briefly "rewind" the last few minutes of time, and "time bombs" which can transport somebody minutes or hours forwards or backwards in time (by which time the planet has moved along in its orbit, so that the victim reappears in empty space).

Over the years, Johnny Alpha's white, incandescent eyes have provided him with several mutant abilities. Most frequently, the high-level alpha radiation emitted from his eyes allows Johnny to see through walls and other solid objects, or to read people's minds. He has also used his piercing stare to inflict severe headaches on his opponents, guide small objects remotely with a kind of limited telekinesis, or to "suggest" illusions or hallucinations (e.g., while fighting the Necromagus, Sabbat, Johnny made Sabbat believe the Grim Reaper was behind him.). There with it. What do you think? Are the rules to complicated or overpowered? Would you use him in your Dredd game? Let me know below and as always thanks. 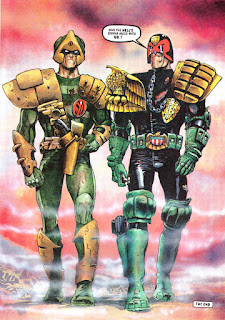