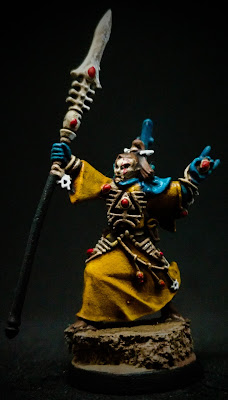 Heading back to the Craftworld for an update on my newest Iyanden character Spiritseer Iyanna. Here is her background fluff:

Hailing from the House of Arienal on Iyanden, Iyanna was destined for greatness when she first set upon the Path of the Witch. During the Battle of the Burning Moon, all of Arienal's family save herself were killed in the Chaos Cyclonic Torpedo attack. Thereafter, Arienal embraced the ways of the Spiritseer and her mind was ever connected to the Infinity Circuit to commune with those that she had lost. When Eldrad Ulthran brought warning to Iyanden of the Great Devourer, he also told the Iyanden Seer Council that the Eldar race's only ultimate hope against Slaanesh lay with Ynnead, the god of the dead. While most of Iyanden dismissed Ulthran, Arienal embraced this prophecy and in a brief moment received a glorious apotheosis where the spirits of living Eldar would become one with the dead. The resulting psychic backlash would stir Ynnead from his slumber, and at last defeat Slaanesh.

Arienal's followers have been no less active than the famed Prince Yriel, throwing their hopes into the ancient prophecy known as the Phoenix Arisen; wherein the Eldar race will be reborn anew. At Iyanna's direction, they have sought the Tears of Morai-Heg, gemstone fragments that possess ancient magic that Spiritseers say would see the rebirth accomplished. Their search for the tears has brought them into contact with humans, Orks, and other primitive races. Reclaiming these tears has proven a bloody affair, and taking possession of the first required a dozen worlds left in ruin. Within a few short years, Iyanna's followers had grown so influential that they had outgrown Yriel's.

After the Battle of Duriel, many assumed Iyanna dead as she had been alongside Taec Silvereye at the time of the planet's destruction. However, this fear proved to be unfounded as she was discovered among the wounded. She later reappeared to help save Iyanden from Daemonic invasion, allying with the new formed Ynarri.

In battle she is armed with a shuriken pistol, the Spear of Teuthlas, and the Armour of Vaul. She is also accompanied by a massive Wraithlord housing the spirit of an Aspect Warrior.

The model itself was pretty straight forward. The base unsurprising is a Spiritseer. The head was a spare I had from the Dark Eldar Wych kit and the Spear of Teuthlas was made using a witch spear from the Skyrunner warlock. For me this was a pretty simple conversion and I am sure others can do better. If you have a conversion drop me a link below.
Posted by Adventures with Peps at March 18, 2018