It's been a while since my last comic review and for that I apologize. I have been heavily distracted by reading for my 2018 book review posts. But I'm having a short break from that to bring you this review. So let us dive in! 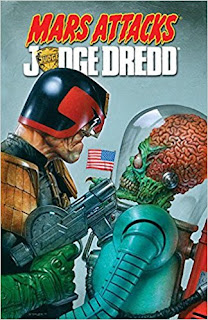 Cover: Not as exciting as it could have been, showing a slightly worried looking Alien facing off against a stern looking Dredd.

A cross-over between Judge Dredd and Mars Attacks (using the IDW franchise). The story has the main man Judge Dredd being called in to investigate a mega racket in the city. What he discovers is a racket being controlled by Aliens from Mars. With their plan rumbled the Aliens launch a full scale invasion of Mega City One. Only Judge Dredd, with the help of Judge Anderson's abilities, can put a stop to the Martian minds suppressing the Judges weapons, giving them a chance to stop the invasion.

Not the best cross-over I've seen or read. At points it was hard to workout who was meant to win with Judge Dredd nearly being killed. Worst still Dredd didn't even seem to care about it then to make matters worst Dredd is forced to pardon a Mafia don to get his help; but manages to arrest the Don for a different crime. Overall a ten switch off your brain read adventure, just remember Dredd fans this isn't cannon. Easy to forget so blame it all on a malfunctioning Dream Machine.

Mafia Bosses:
Posted by Adventures with Peps at March 15, 2018