I'm back dudes with book six in my series of Books of 2018. Sneaking in with book six on the very last day of March! I took a break from sci-fi for this read and headed in to the hot sweaty jungles of pirates, snakemen and ruined pyramids. I found this book whilst actually searching for Gav Thorpe novels are my local library. Based of a fantasy Wargame called Frostgrave I was intrigued by the idea of some pirate stories and the cover really aided. 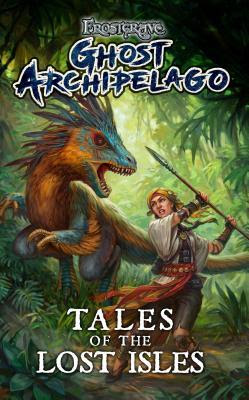 Commercial Fluff: The Ghost Archipelago has returned. A vast island chain, covered in the ruins of ancient and otherworldly civilizations, the Archipelago appears every few centuries, far out in the southern ocean. At such times, pirates, adventurers, wizards, and legendary heroes all descend upon the islands in the hopes of finding lost treasures and powerful artefacts. A few, drawn by the blood of their ancestors, search for the fabled Crystal Pool, whose waters grant abilities far beyond those of normal men. It is only the bravest, however, who venture into the islands, for they are filled with numerous deadly threats. Cannibal tribes, sorcerous snake-men, and poisonous water-beasts all inhabit the island ruins, guarding their treasure hordes and setting traps for the unwary.

This fiction anthology contains nine stories of adventure set in the Ghost Archipelago.

First up I want to say it was nice to read a bunch of short stories instead of one long story. This had a two fold effect on me. One; if a story was dull/boring/bad, at worst it was only thirty pages long and I was soon onto the next tale. Two; if it was a good story it ended to soon and I felt cheated. I guess there was no pleasing me..

Ultimately the stories and I guess authors to a point lacked a depth of background. We just got thrown into a world and was expected to understand what was happening and what the different terms meant. I found myself relying on google to answer my questions and aid with the early stories. This came across as a recurring problem, as authors struggled to explain a characters past or why these different characters are all drawn to the region.

Throughout every tale you spent roughly ten pages learning names and then forgetting them by the end. I found myself not engaged to any hero/villain, instead I became more interested in the flora and fauna of each tale willing there to be more Snakemen, dinosaurs and temples fall of traps and pitfalls.

It felt like this book would have been better off by allowing fewer authors more page space to tell longer tales of adventure. For me there was two stand out tales the Serpent Engine by Ben Counter and The Journal by Gav Thorpe. These tales I would have loved to read more of and really get behind the cast of characters.

This was an average book at best, full of opportunity of bounty but instead left to flounder on the reefs shipwrecked.
Posted by Adventures with Peps at March 31, 2018