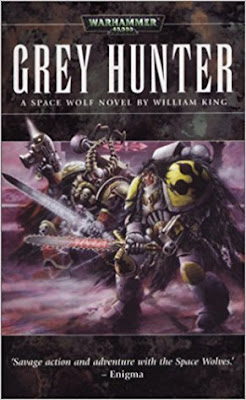 Welcome to the Grey Hunter book review. The third installment of William King's exploration of the Space Wolves and their most popular character Ragnar Blackmane. The first book of the tale can be found here and the second installment here.

This will also see the completion of my fourth book of 2018. As you may have seen or read elsewhere each year I try to push my slow reading ability more and more. For 2017 the challenge was 12 books in 12 months, which I completed. For 2018 it is a minimum of 18 books in 12 months. Not to hard I know, but for me it would be quite the achievement. So with this all in mind let us dive in to this next review.

Title: Grey Hunter
Author: William King
Publisher: Black Library
Format: Paperback
Page Count: 288
Commercial Fluff: "Ragnar Blackmane is unique among the Space Wolves in that he ascended to the Wolf Guard without ever being a Grey Hunter. But how did he manage such a feat? The beginnings of that story are told here… When the Spear of Russ, an ancient relic of the Space Wolves once wielded by Leman Russ himself, is stolen, the Chapter seeks its return on the world of Garm. But when they are ambushed by the forces of Chaos the enraged Space Wolves learn that there is more to the attack than they could have guessed, for an ancient enemy of the Chapter is prophesied to be reborn…"

So first up this is the third book in a series, so don't just jump straight in as it will be confusing to understand the characters and how they are organised. Unsurprisingly it features Ragnar as a Blood Claw going to war within his great company of Space Wolves, fighting against a chaos infested uprising that has also stolen the legendary Spear of Russ on the World of Garm. Angered by this a front to chapter, the Space Wolves head to Garm in full force to bring down this uprising and recover the lost Spear. But it is never that easy in the 41st millennium... In a surprising twist we see the return of Madox- A Thousand Son Sorcerer from the first book, who has seemingly learnt a few tricks and grown as a villain. Madox is attempting to open a portal to the planet of Sorcerers to allow Magnus the Red to re-enter the material realm. Soon Ragnar is facing off against Madox is a race to close the portal that is letting chaos flood into the world. What follows is a pretty epic battle as Ragnar fights Madox and in the final moments choses to throw the Spear of Russ into the portal of chaos closing the tear and ending the conflict. This leads to mixed feelings for Ragnar as some believe him to be a saviour and a hero, whilst others see him as the upstart who lost Leman Russ's Spear.

Like the other books in this series William's writing is sometimes blunt and bland, but his fight scenes are always well paced and not gory for the sake of it. I enjoyed about 70% of the book whilst 30% of it seemed to dragged on whilst Ragnar faced inner demons and became an Emo marine. If you are Space Wolf/Space Marine fan you would find this an enjoyable read.

As always thanks for reading my review and feel free to follow or drop a comment below. My next book on the list is Neferata part of the Warhammer Time of Legends series. A step into Vampires and Fantasy.
Posted by Adventures with Peps at February 26, 2018