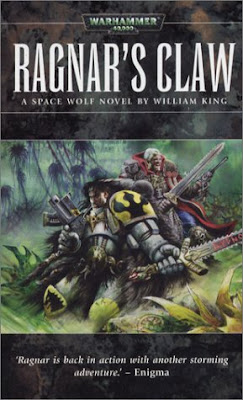 Welcome to Ragnar's Claw book review. The second installment of William King's exploration of the Space Wolves and their most popular character Ragnar Blackmane. The first book of the tale can be found here and was the fourth book I ever reviewed. It's taken me a while to get back to this series (my bad).

This will also be my third completed book of 2018 (yay me). Each year I try to push my slow reading ability more and more. 2017 the challenge was 12 books in 12 months which I completed and for 2018 it is a minimum of 18 books in 12 months. Not to hard I know, but for me it would be quite the achievement. So with this all in mind let us dive in.

Title: Ragnar's Claw
Author: William King
Publisher: Black Library
Format: Paperback
Page Count: 282
Commerical Fluff: From the death world of Fenris come the Space Wolves, the most savage of the Emperor's Space Marines. Ragnar's Claw is the storming tale of Ragnar's first mission as a young Blood Claw warrior. From the jungle hell of Galt to the polluted cities of Hive World Venam, Ragnar's mission takes him on an epic trek across the galaxy to face the very heart of evil! 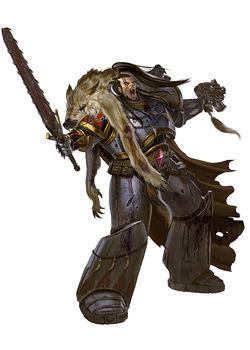 First up this was a surprising quick read for me. William King's writing style is engaging and easy flowing. It kept me engaged from start to finish. Down side to his storytelling is that you need a working knowledge of 40k otherwise you get completely lost. The tale follows Ragnar's first off world mission as young Blood Claw (think entry level fighting unit). His mission to help aid an inquisitor on a mission to collect three pieces of an Eldar artifact, which is prophesied to help save the inquisitors homeworld from a deadly plague. Throughout the tale the marines face off against orks, genestealers and daemons, whilst they traverse jungle worlds, space hulks and industrial planets. Ragnar as a character gains more background and becomes a more rounded character with faults and flaws that make him seem human. Even developing a fear of mortality after being seriously wounded by some ork's and watching a comrade die in battle. Throughout the book we deal with Ragnar's suspicions about his allies and get rewarded at the end for wondering who are these offworlders and what are they really after.

As with the first book, King expertly delivers fast pace battle scenes that are quick and brutal as befitting a 40k book and starts to explain the wider Imperium of Man to the reader via Ragnar's own developing story. For me the best part was how far Ragnar and his pack developed as group, traveling further than ever before and fighting foes for the first time we start to see a novice unit becoming a elite fighting force.

Overall a fun, quick read, some may find it a simple book. Personally I really enjoy it.

"For Russ and the Allfather!"
Posted by Adventures with Peps at February 18, 2018