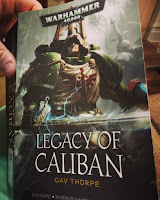 So for those not in the know,I'm attempting this year to improve on my Books of 2017. Last year I challenged myself to a book a month and managed to just complete it. This year I am upping the twelve book total to eighteen. This will hopefully improve my reading ability (dyslexia sucks), but will ultimately give me a reason to blog even more!

So here we are fourteen days into 2018 and the first book is complete. It continues the trilogy of Legacy of Caliban by Gav Thorpe. It follows a group of Dark Angels through three novel and a few short stories. The first part is here for your reading pleasure. For this review we will be going over Battle Brothers and Master of Sanctity so let's dive in: 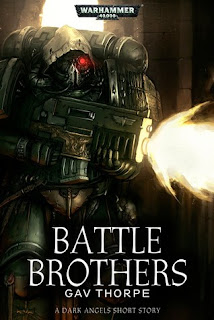 Commercial Fluff: As the battle-brothers of Fifth Company struggle to keep the Chaos-worshipping forces of the Unworthy at bay in the warrens of Port Imperial, it falls to the elite warriors of the Ravenwing to hunt a mysterious traitor, one of the Fallen. What awaits Sergeant Cassiel and his Black Knights squad in the depths of the corrupted space station?

Overview: When I first started reading this tale I thought I had accidentally gone back a few chapters into Ravenwing (I need a bookmark!). This short story is in fact a deleted chapter of sorts; set during the 2nd and 5th Companies assault on Port Imperial from the Ravenwing novel, but this time told from the point of view of the injured Brother Sergeant Cassiel and his soon to be rescuer Brother Apothecary Gideon. It's what you expect from a 26 page space marine tale, it is full of quick fighting action, violences and iconic moments ripped from a 80's action movie. Why should you read it? Well for one, Brother Sergeant Cassiel's epic fight moments: left alone having suffer horrific injures- losing his legs and being left pretty much crippled from an earlier ambush the poor Sergeant has to outlast the crazy cannibal cultists that are breaching the room from every possible entry point. It's amazing how calm the characters are throughout this tale. Great read for sure. 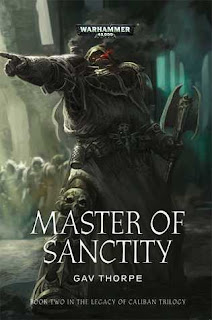 Commercial Fluff: More secrets of the Dark Angels are revealed as the Legacy of Caliban trilogy continues. The Legacy of Caliban echoes down through the ages, and the secretive mission of the Dark Angels Space Marines continues. Interrogator-Chaplain Asmodai sees treachery and deceit everywhere he turns – while this serves him well in his hunt for the Fallen, it also strains the Chapter’s relations with their Imperial allies. With their true quarry now seemingly within their grasp, Brothers Annael and Telemenus find themselves at the forefront of a new operation that could shake the Imperium itself to its very core.

Overview: The story follows on from the discoveries and revelations made in Ravenwing. We follow Annael as he is freshly promoted to the Black Knights and Telemenus who is promoted into the ranks of the First Company aka The Deathwing. Through their eyes we see how the terrible knowledge of the Dark Angels past affects them both and changes their lives forever. We also get introduced to two new characters Chaplain of Sanctity Sapphon and Chaplain of Repentance Asmodai. Their constant power struggle and differing viewpoints is a true highlight of the book. It fun watching the pair argue how to deal with a Fallen marine and how easy it is for him to manipulate the pair into an ill prepared hunt for more Fallen Marines.

One of the best sections of this story for me was the Daemon World Ulthor. Here on the very edge of the Eye of Terror both Ravenwing and Deathwing make planet fall in the hope of capturing another Fallen Marine. The descriptions during these chapters are just epic. From the city itself manipulating the buildings to stunt the attack, all the way to the creepy ass fortress/mansion of lungs, eyeballs and greater daemons. What happens here to poor Telemenus is just heartbreaking and I can't wait to see if he comes back in the third title.

The ending had a twist I didn't expect and I have been left ultimately wanting to jump into the next and final installment. So come back soon for the final review.
Posted by Adventures with Peps at January 14, 2018