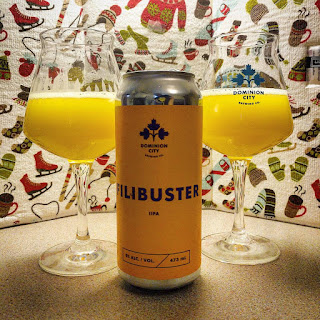 Welcome to 2018! First beer of the year is from a local brewery called Dominion City. This brewery has seen a big change over the last year. They seemingly found some money or a new backer and are ramping up their production. They have also thrown a sizable wad of cash at marketing, social media and websites. This is a brewery to watch as I'm sure they will be making waves in 2018.

Name: Filibuster
Style: DIPA
Brewery: Dominion City
Country: Canada, Ontario, Ottawa.
Price: $4.20 CAD
ABV: 8%
Commercial Fluff: "Like the legislative tactic for which this beer is named, Filibuster invites you to sit back and relax. Just don’t plan on anything productive happening for awhile. Loaded with juicy hop flavour, tropical aroma and still refreshing despite a considerable malt body, this double IPA will get you talking."

Label: Pretty standard label from them. Not much else to say on this one.
Sight: The pour is a murky opaque yellow, which forms a small off white head to cap it. Looks like orange juice. Good so far.
Aroma: Aroma gives off tropical fruit flavours think Mango and Pineapple juice. Starting to wonder if it is just Pineapple juice from a carton.
Taste: The flavour isn't quite what I hoped for. It tastes like canned pineapple and the hop taste sticks in your throat. Seems like a sticky beer that may have been released too early, just seems to green and fresh.

Would I buy it again? No. I bought four cans but ultimately gave away three cans after this one. Nice to have them try this out but it really didn't work for me. Other breweries do this style better, but I do understand it is a learning experience so I hope they tweak it and a make a Filibuster 2.0
Posted by Adventures with Peps at January 08, 2018