So I finally finished my Angel gang from Judge Dredd Complete Case Files 04. This makes me extremely happy as these guys have been collecting dust for way too long. For those who don't know the Angel Gang then please read the Complete Case Files 04 review to find out more. Basically they are the roughest, toughest, meanest and deadliest desperados in all the Cursed Earth! Here is my fluff.

" Judges it has come to our attention via our Wally Squad Division. That the Angel Gang are active within our sector! If sighted call in backup. No heroics, your not Dredd. Now get on the streets and arrest some perps."-Unknown Senior Judge.

Further info: The Angel Gang are the most feared and infamous band of thugs to have come out of Texas City, the Angel Gang were responsible for a near endless string of crimes with one overriding common factor- violence. They are believed to have been killed during the Judge Child mission, but seemingly keep appearing either due to time travel, extra dimensional travel or they just didn't die. Either way when you see the Angel gang run the other way.

Never one to commit a murder when an atrocity will do. The Angels are led by the father of the Family, Elmer "Pa" Angel. 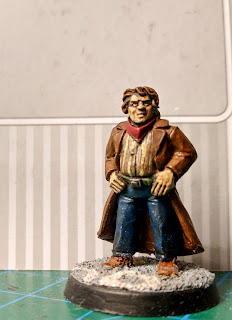 Pa Angel has four sons, Link Angel is a classic psycho with a Shotgun. Classic attire includes a biker costume and an old bulls ring through his nose. 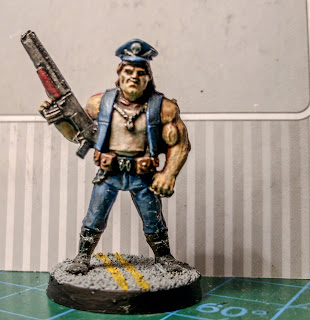 Then there is "Junior" Angel, youngest and smartest (which isn't saying much) of the boys. He is the closest of the boys to his father. He is never seen without his trademark Derby Hat. 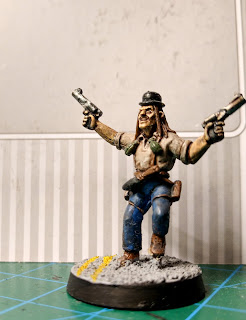 "Mean Machine" Angel, a cyborg. Originally known just as "Machine" was nothing like his antisocial family, so "Pa" forced a Texas City surgeon to come out to their hideout in the Cursed Earth and surgically modify him. He now has a mechanical arm, and his skull is covered with a metal dome with a dial. The dial's setting range from 1, where he is surly and mean and nasty, on up to 4, where he is full on berserk! 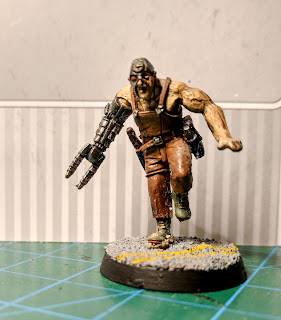 Then there is "Fink" Angel the Eldest of Pa's boys. Fink rarely lives with the rest of the family, preferring to live in holes he digs or finds. He has a skeletal face, and is the family specialist in all things poisons. His arsenal includes poisons which can temporarily paralyse a victim, as well as ones that can kill quickly. Fink was known to have had a child called Ratfink. 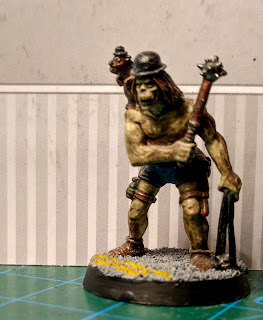 Hope your enjoying these, please drop a comment below and let me know what you think and that I'm not alone. Until the next time, cheers.
Posted by Adventures with Peps at December 27, 2017