Spirit Seers are the heart and soul of Iyanden, more so after their destructive blow from Hive Fleet Kraken (more on that story another day). Now these specialised Warlocks have the task of acting as the link between the Dead and the living. It falls on the Spiritseers to maintain, summon and guide the spirits of the dead into their Wraith Construct shells, specifically the war constructs of the Wraithguard and Wraithlord. It is most commonly believed that the first Spiritseer was a Farseer hailing from Iyanden, who having lost his lover released his living spirit into the Infinity Circuit to be with her. In this act of selfishness he found himself able to bridge the gap between living and the dead and thus the Spiritseers were born. 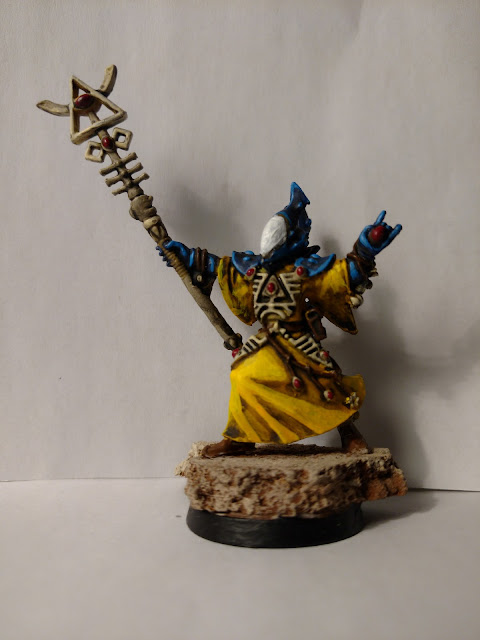 Unsurprisingly Iyanden has the most active Spiritseers of any Craftworld, due to the low number of the living and are believed by many to be the best at their craft. The Spiritseers' speciality training has hardened their own souls against the danger of becoming too enthralled by their command over the dead and thus actually becoming a true necromancer (possible fallen/corsair eldar conversion). Whilst the use of the Wraithguard and the Wraithlords is seen as a last resort by the Craftworlds and only when their Farseers believe that they face the direst necessity. The use of such units is seen as little better than engaging in petty necromancy among the common Eldar, but is tolerated because the Eldar's low population makes reliance upon their dead a necessity if the race is to survive in its weakened state.

One such Spiritseer is Shear'ann of Iyanden. Having trodden the path of the Seer it soon became apparent that Shear'ann talents laid with communicating with the dead and soon he rose to a position of recognition. In one battle when Iyanden's forces began to fair poorly in battle with an Ork horde of the Evil Sunz Clan, Shear'ann was charged with killing the Warlord that led them in battle. When the Warlord's location was finally discovered, Shear'ann led a Wraith host, including the Wraithlord Bemenacth, in an ambush against the xeno menace and in turn change the battle to Iyanden's favour. Even with the powerful forces under his command, Shear'ann feared the omens of the coming battle were not good, a fact he shared with the ancient Bemenacth. The great Wraithlord, considered a hero to the Eldar of Iyanden, assured him they would prevail and when the Warlord approached their hidden location, she proved it when she single-handedly killed the Warlord herself.

Following the rise of the Ynnari, Shear'ann has become a true believer in the cause and has joined up with the resurrected Prince Yriel in his quest to help bring about Ynnead. Shear'ann can be found leading the Wraithblades of Yriel's Fury into battle were the aids them with his abilities of Quickening.
Posted by Adventures with Peps at December 10, 2017