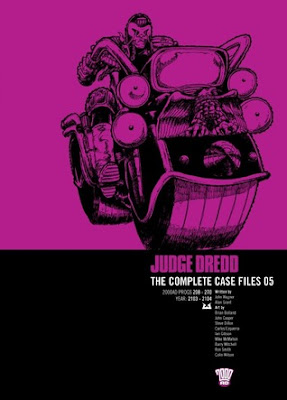 Welcome back for another epic Judge Dredd Case Files review. This time we delve into number Five,  which I believe to be one of the best. A bold striking purple jacket greets us from this 404 paged tome. Spanning progs 208 till 270 (62 progs worths) it covers the Mob wars, the return of Judge Death and the Apocalypse war years of 2103-2104. I love this era of Judge Dredd as we see great artwork, stunning stories and the rise and fall of some great heroes and villains. For this book I am going to break it down into separate sections starting with the Mega Rackets. So let us jump in.

Story: The Problem with Sonny Bono- In the future city of MC-1 housing is a real nightmare. To combat this certain blocks become designated 'Problem Blocks', the idea being that all ex-criminals, rent dodgers and troublemakers live there in an attempt to segregate them from 'normal' citizens. Sonny Bono block is one such place and soon it's citizens are in open revolt against MC-1 and Judge Dredd.
Highlight: The ending to this tale is quite comically and a classic Dredd answer to a problem.

Story: The Mega-Rackets Body Sharks- Body Sharking is a popular crime in MC-1.Basically it is the legal dealings of the bodies of living humans. It is a crime so popular that it will affect one in four citizens! The story revolves around Ratners Rest Home for the Semi Dead. On the outside it looks like a cryogenics rest home, let inside it is a front for Remington Raters Body Sharker's. Here you can leave a loved one and take out a huge loan on their body! If you don't pay the loved one ends up dead or stripped of organs... Even criminals will come here in an attempt to fund robbies or off world transport. In this tale we see how hard it is for the Judges to shut down these operations and how the main Kingpins are never caught.
Highlight: The whole idea of Body Sharking is truly an interesting. It shows how low people of MC-1 will sink to secure money and power. 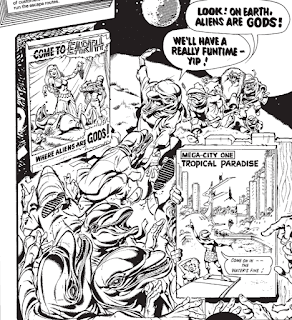 Story: The Mega-Rackets Perp Runners- We continue the Mega-Racket theme this time with Perp Runners. Perp Runners are criminals who aid in the escape of other criminals off world. In an attempt to shut down one operation, Dredd under goes facial surgery to look like escaped criminal Icepick Joe and hires a perp runner. Soon things turn bad off world for Dredd as he is uncovered and captured by the runners. Once caught and chained Dredd bares witness to the full extent of the ship crews crimes. The criminals once aided by the perp runners are in turn sold to alien slavers for a pretty profit! Then the perp runners fill up on Aliens wishing to visit earth, who unfortunately for them never get there as they are dumped into the vacuum of space (an acted called chump dumping). With the ship preparing for another Chump Dump, Dredd escapes and panics the aliens onboard. Using the confussion Dredd is able to force the crew into surrendering.
Highlight: Unable to prove Slik Ike Kolorado as the man in charge, Dredd informs him that the last batch of perps (the ones sold into slavery) are heading back to earth. Maybe the street Justice of MC-1 will get Slik. 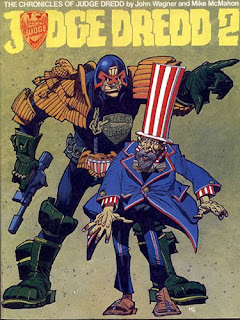 Story: The Mega-Rackets Umpty Baggers-The illegal manufacture and sale of the super addictive umpty candy. Judge Dredd believed he had solved the Umpty problem years ago after forcing it's creator Uncle Umpty into a deep space exile. What he hadn't planned on was the Jong crime family raiding the spacecraft that carried Uncle Umpty. Now with the knowledge of how to produce the candy a massive black market business has evolved in MC-1, even some Judges have been lured into the crime!
Highlight: Even though the Jong family is gone the recipe is still loose in MC-1 meaning this crime is here to stay.

Story: The Mega-Rackets Blitz Agencies- Basically Murders for hire. Once paid they will stop at nothing to get the job done. Annoyingly for Dredd no blitzer has ever been captured, due to an explosive in the brain stem that actives as soon as the user knows they are captured!
Highlight: Once a contract is taken out the blitz agents just keep coming.The victim in this tale chooses life in an ISO-Cube over the idea of constant assassination attempts.

Story: The Mega-Rackets Psykers- The mob can make anything or anyone into a business including psykers. In the city of the future some citizens are born with psychic abilities be it able to read minds, predict the future or in this case alter and manipulate a mans mind. Having witnessed another death at the hands of a psyker Dredd decides to start applying some heat to the organisation protecting the psyker. Soon Dredd has pissed off the mob enough that they permanently end their contract with the psyker in question.
Highlight: Synthetti Men that aid in the killing of Restaurateur Aldo Pollo

Story: The Mega-Rackets Numbers Racket- A specialist type of fraud involving a company's computer code. Once the underworld has access to the coding they are able to manipulate the company and bleed it dry of wealth. After the death of a numbers specialist due to an acid bath, Dredd is soon on the trail of Lumpy Lepke, one of the biggest number game mobsters in MC-1. Using subterfuge Dredd is able to anger Lepke just enough to link him to the crime and then all hell breaks lose.
Highlight: Dredd dropping from an overpass tunnel onto a moving mopad, classic badass Judging. 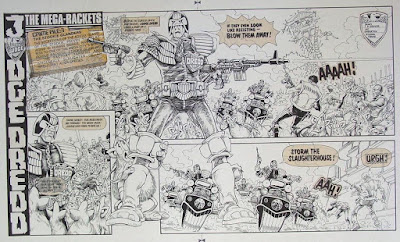 Story: The Mega-Rackets Stookie Glanders- Since the discovery in 2059 that the glands of a xeno known as a Stookie has been proven to delay aging, Stookie Glanders have been making big money. Made illegal in MC-1 as Stookies are an intelligent race, the gland farms have now moved into the Cursed Earth. Making the ability to shut them down all the harder. After a routine search of a Cursed Earth trawler a Stookie escapes, tattooed on him the location of one such farm. Soon Dredd is leading the charge to close down the business for good.
Highlight: A pretty actioned packed strip as we watch a squad of Judges tear through a bunch of perps working at the farm. Purely effective and brutal work!

Story: The Mega-Rackets Mob Wars- In MC-1 full out mob wars are rare. Most crime families have decided it is hard enough fighting Judges to fight each other too. But after the Xeno race Mophioso come to town everything changes. The mobsters have to make a choice work for the Mophioso or die! of course this doesn't go down well with some of the families and soon it is open warfare in the underworld as the Mophioso push to take control.
Highlight: Dredd using the situation to clear out the mob. At any point Dredd was allowed to deport the Mophioso, but instead he allows them to fight the mob. A brutal and underhanded way to deal with MC-1 mob problem.

And with that the Mega-Racket tales come to an end. This was a great opening to this book. The artwork was on point and the tales in my opinion are the correct length at a couple of progs a piece. The standout tales for me are the Stookie Glanders mainly due to the Emberton artwork and the Perp Runners showcasing the lengths criminals will go to in order to make money. I also enjoyed the fact that Dredd has to rely on the underworld to solve a lot of the crime problems. We get to see Dredd manipulate the situations and then standing back ready to clean up what is left. This really opens up Dredd's characters and shows off just how far he is willing to go to protect the law and his city.

Be sure to check back soon as the next installment involves the sinister Judge Death and the return of Judge Anderson! 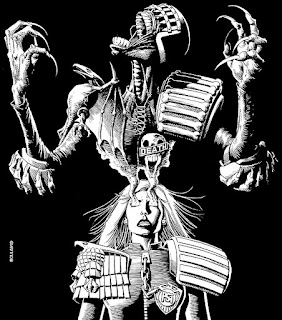 Posted by Adventures with Peps at December 11, 2017