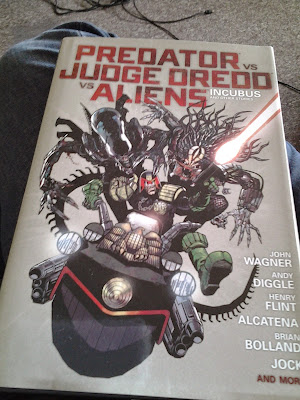 Surprise it has been a while but it is time for a comic review. For this review we turn to Predator vs Judge Dredd vs Aliens. Yes you did read that correctly, two of cinemas most scary sci-fi aliens have come to Mega-City One (and I don't mean Sly's attempt at Judge Dredd) and only Judge Dredd stands between them and the unprepared citizens. The book is roughly A4 size format with a beautiful dust jacket, portraying the three antagonists of the tales. Hidden away under the dust jacket is the matt black hard cover, with red font writing which reminds me of the original Predator Movie font which was a nice touch. So let us get into the stories: 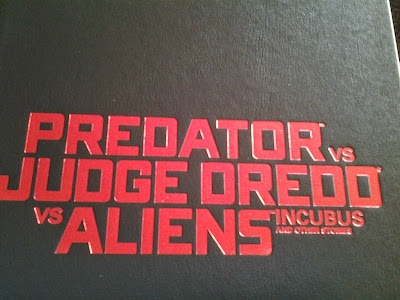 Dredd VS Predator
First up in the book is Judge Dredd vs Predator. The story begins in the outskirts of Mega-City One in the Cursed Earth. A lonely scrap prospector named Gomer and his robot assistant Ben, see what they believe to be a shooting star. Thinking that a fortune of precious metals has just crashed over the hill, Gomer goes off to investigate. Instead of finding his weight in precious metals, the poor prospector instead finds an alien spaceship! 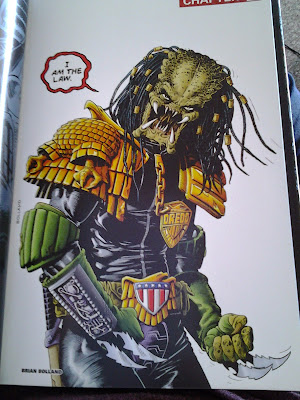 To make matters worst for Gomer the owners of said ship are still around, the last panel of this section  is zoomed out, showing the glowing lights of Mega-City One in the distance. Whilst in the big Meg it's business as usual for the MC-1 Judges, chasing down two gangs fighting over turf. Soon the Judges are ambushed by an invisible assailant, pinned down and injured they call for backup and of course Judge Dredd responds. Arriving at the scene, big JD's bionic eyes pick up on the invisible assailant. Opening fire, Dredd uses hi-ex to drive away the assailant, before giving chase. The Predator escaping Dredd's explosive wrath flees to an empty Zoomline shed. It is here that Dredd finally comes face to face with the Ultimate Game Hunter! What follows is a slugfest with the Predator and Dredd going toe to toe, resulting with Dredd losing (what the hell!) and being knocked out cold by a fall. Before backup can arrive to aid Dredd. the Predator makes good it's escape. Judge Dredd having suffered a severe beating is rushed to the medical wing of Justice central, where he spends the next five hours in a rapid heal pod. Slowly a recovered Dredd comes too and discovers that the body has count risen. More shockingly is that the alien seems to be only targeting Judges now thanks to seeing how much of a challenge Dredd was. But the Justice Department hasn't been idle. They have formed a special task force to located and contain this dangerous threat. Dredd in his usual polite manner takes control of the task force and immediately pisses off the PSI auxiliary Schaefer. Schaefer is in fact the Great, great, granddaughter of the late Dutch Schaefer (ref. first predator movie). Dutch was the sole survivor from a previous Predator encounter back in the late 20th century. Schaefer attempts to locate the alien using her psi abilities and the blood of the injured Predator. But as results are slow coming and the body count rising, Dredd and Schaefer have an argument about her claimed abilities. Schaefer storms off with the blood sample and speeds away in her car which she promptly crashes. Due to the accident Schaefer ends up ingesting a sample of the xenos blood (gross!), at this moment she gets a flash of the Predator's nest and a captured Judge hanging near by. Realising this is the break they are after, Schaefer consumes the rest of the blood and forms a psi bond with the alien hunter. Finally with a target, Dredd leads the task force along with support from two Wardroids against the Predator. But it's never that simple and soon the Predator has tallied up an impressive kill ratio on the Judges. Now alone once again Dredd faces off against the ultimate Game Hunter, in a burning down building. This time though the lawman of the future is triumphant and leaves the fallen body of the xeno to burn with the building. 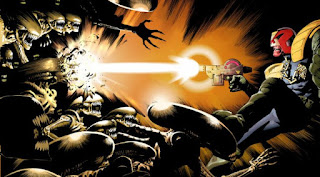 Overview
This was a great story and I wouldn't expect anything less from a Wagner written piece. But I felt that Schaefer as a character, didn't really add anything to the story and could have been any old psi within the department. Would have liked to have seen more effort put into her, to make a more well rounded persona. Also if I had been Tech-Judge, I would be so pissed off at Dredd for burning the aliens tech, though I'm sure the lawman wouldn't care. But a good start to the book.

Incubus a.k.a Dredd VS Aliens
The second strip involves Wagners script writing skills again, but this time the artist is Henry Flint. Flint is one of my favourite Dredd artists. So I'm extremely excited to get into this story. Straight off this story is set later than the Predator story. How can I tell...well in the Predator story Dredd was armed with the MKI lawgiver, whilst in the Alien story Dredd has the MKII. The story begins with Dredd on crowd control in a Southern Sector of MC-1. The crowd are protesting the building of a new power tower and who could blame them after the last one became an active volcano. With the sectors road grinding to a halt, we come across a very sweaty and sick looking Jimmy Godber. Who is trying to get to the Eisenhower Hospital. But Godber is not alone. He is being chased by two armed assailants. Soon gunfire is echoing in front of the Hospital, which gains Dredd's aggressive response. The assailants are soon dealt with and Dredd takes a very sick Godber into the hospital.

Within moments of reaching the medical staff, Godber begins to suffer fits. As the Judges struggle to restrain Godber, his chest bursts open in a fountain of gore. From within the injury appears a worm like creature that escapes into the hospital vents. Dredd unsure what exactly he had seen immediately quarantines the hospital and calls in the Justice Department's specialists. This elite team is called 'Verminators' specialising in pest control of the future. Equipped with the best armour and weapons the team are expected to clear out pests, from rad roaches all the way up to nests of albino sewer gators. The 'Verminators' team consists of Packer, Butterman, Wilson, Maier, Marinello, Fisk, Millar, Orson and Shook. Straight away Packer orders all the wards into lockdown to restrict movement in the hospital. And launches a hover camera into the vents. Feeling this situation is under control Dredd heads off with Giant and Sanchez to investigate Godber's background.

Soon it becomes apparent that they are dealing with an off world creature and the death toll starts rising rapidly. Not wanting to give too much away. All I can say is the next few pages are classic Alien movie scenes, as the teams finds out the hard way about these aliens. There's gore, blood, acid, missing body parts, acid, confined spaces and did I mention acid? There is even a fight scene of Dredd versus Alien on top of a moving Zoom train, which is epic! But as the case unravels we find out the real mastermind behind this infestation, is Mr. Bones. A mutant banished to the Cursed Earth as a child and forced into becoming a space pirate. During his time as a freebooter Mr. Bones' hatred for the justice department grew. Then one day he came across the aliens and had the answer for his revenge. Harvesting the eggs Mr. Bones and his mutant band of merry men, transported the eggs to the undercity and set about growing a hive, directly beneath Justice Central! With fear that the Judges were onto them, Mr. Bones brings his plans forward. Blasting a hole into the basement levels of Justice Central, through this hundreds of aliens swarm in. Dredd and Giant find themselves swamped by the xenos threat. Imagine epic last stands, a judge death toll unheard of since the Apocalypse war, a rescue/suicide mission and coming face to face with a Queen! These last fifteen odd pages are so action packed, that if I went into any real detail you would still be reading for another week. But rest assured our future lawman deals with the bugs in an unforgiving way.

This story was epic! I have no other way to describe it. It was full on action packed from the first page to last. The suspense had me on a knife's edge and I couldn't help but grimace when the explosives got used on a bug. The acid blood led to some great gory artwork by Flint. This story is now one of my all time favourites.

Final Thoughts
Well now to the final review. But how to review this book. I will keep it simple and split it into likes and dislikes.

First to the things I liked;
Dislikes; 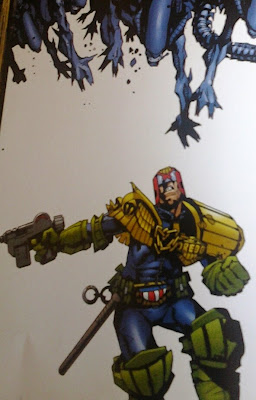 Overall this book was an amazing read and well worth every penny. I know I want to re-read it already, which is a good sign. So with all considered this book scores a solid 4 out of 5.

As always let me know what you think. Do you like crossover tales, do you hate them, would you change them? What crossover would you like to see happen? Drop me a comment below and until next time. Thanks.
Posted by Adventures with Peps at December 05, 2017