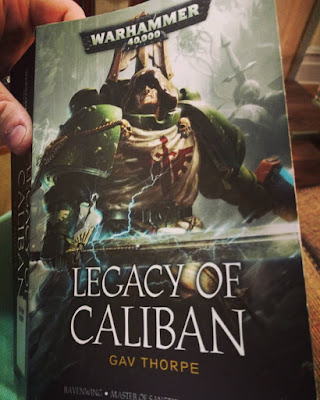 It's happened I've completed my 2017 challenge of reading and reviewing a book a month. As a suffer of dyslexia it has actually helped me motivate myself more and challenge myself to push harder on my reading for next year. The plan is to read eighteen books minium next year and publish a post on each, giving me a 50% increase in reading. So please wish me luck!

Books of 2017 has been an adventure. Nine are from Black Library set in one of their verses, the remaining three came from the 2000 AD comic verses. All shared the theme of Sci-fi and all where enjoyable. I want to finish a few series before I move on so expect more Dark Angels, Space Wolves and Ahriman. I also need to go back and start at the beginning of the Horus Heresy Series along with Gaunt's Ghosts so they should also appear soon. On top of this I want to try out some fantasy novels and even an autobiography so watch this space in the new year!

So the final Book of 2017, who to finish with? It was a hard choice as I did think of reading a Gaunt's Ghosts tale as I really enjoyed it, then I also have the follow up to Asurman along with Space Wolves. But as I looked at my shelves I noticed the Legacy of Caliban by Gav Thorpe and knew it had to be it. Thorpe is one of my favourite authors at moment especially with his work on the Eldar stories and with the Christmas release of Dark Angels maybe it would inspire me to build a new army. The book itself is a mighty tome so I am breaking it up into the three main books- Ravenwing, Master of Sanctity and The Unforgiven. For this review it is all the short stories before Ravenwing and then a Ravenwing review. Totaling 310 pages and 4 stories. So let us jump in:

A Hunt in the Dark

Pages: 26
Commercial Fluff: "The Master of the Ravenwing is dead. Gideon, the last holder of that august position, has nominated the brash young Black Knight, Sammael, as his successor. But the secretive masters of the Dark Angels Chapter have their doubts about Sammael, and about the events surrounding Gideon’s untimely demise. As they subject him to psychic interrogation and test him to his very limits, Sammael must discover if he is suitable for the role of lord of the hunt, or if he harbours a secret taint…" 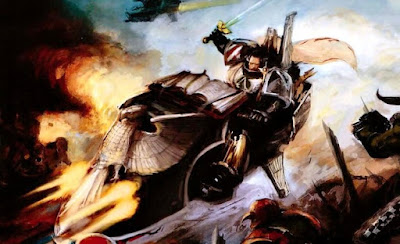 Overview: A great view to the inner workings of the secretive Dark Angel Commanders. As Sammael is tested for the right to lead the second company, we get to relive the the dying moments of Grand Master Gideon and read as the Ravenwing charge headlong into the guns of a Chaos Reaver Titan. But as Sammael tells his story it would seem a prisoner has escaped, should Sammael follow orders or hunt down the prisoner? An enjoyable introduction to Sammael, fast paced and actioned packed for a 26 page piece.

Honour of the Third

Pages: 6
Commercial Fluff: "Furion’s Black Crusade has reached its height, and all that stands between the Chaos Lord and victory is a single warrior… Belial, a sergeant of the Dark Angels, stands before this mightiest of foes, determined to achieve victory or die trying. Will a new legend be forged, or will Furion add another skull to his tally?"

Overview: A short story of 1,000 words. Set early in Belial's career we start to see the makings of the Marine who would eventually lead the Deathwatch. For me it felt rushed due to the word count and that Furion wasn't as much as a threat as they made out. He razed seventeen planets and was beaten with ease. Not a bad tale but if given the space could have been epic!

Holder of the Keys

Pages: 8
Commercial Fluff: "One of the Fallen, the Dark Angels who betrayed their oaths and turned on their brothers, relives his past under the psychic interrogation of Chief Librarian Ezekiel. But with treachery and falsehood in his nature, nothing the Fallen says can be trusted – does Ezekiel hold the key to unlocking the truth and discovering the warrior’s role in the fall of Caliban?"

Overview: Originally designed as an audio drama this is the written version of what was acted out. By receiving and reliving the confessions of a Fallen, Chief Librarian Ezekiel has to question everything is it the Fallen who lies or is the Inner Circle of Leaders that lie. Once more you are left wondering who are the real traitors; the ones who followed Luthor or the ones who followed the Lion? 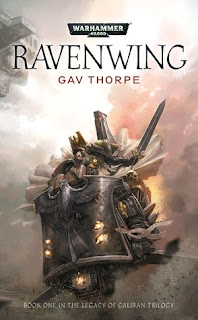 Pages: 270
Commercial Fluff: "The Ravenwing stand apart from the rest of the Dark Angels Chapter - these dynamic Space Marines take to the battlefield upon steeds of adamantium and plasteel, and swoop from the skies in lightning-fast speeders to bring death to the foes of the Imperium.
When he joins their prestigious ranks, Brother Annael finds himself thrust into a whole new world of shadowy intrigue, and privy to secrets unknown to his common battle-brothers. In the wake of the conflict at Kadillus, hints of a dark conspiracy begin to emerge, and it soon becomes apparent that the Ravenwing has a sacred duty far more vital than hunting down orks..."
Overview: So I like Gav Thorpe written tales (he is possibly one of my favourite authors) so I went into Ravenwing ready to enjoy it. The story begins by following Brother Annael as he is raised into the elite 2nd Company commonly known as the Ravenwing. Here he enters the first circle and learns of the true hunt and has to embrace the dark secrets and shame of the chapter. At the same time we also follow a section of the 5th company as they struggle to understand why the Ravenwing aren't allowing to assist more in the battles. The book travels between warzones pretty quickly in an attempt to showcase how the ravenwing work. It was great to go back to Piscina as I have fond memories of the original campaign appearing in White Dwarf (back then it was Orks vs Dark Angels). Then we travel to Port Imperial, get a bit of a space battle and then a boarding action this is properly my favourite part of the book. Finally we land on the final planet to end the hunt. Here the Angels face off against the Deathguard and stories of the 2nd company and 5th company combine. The book ends with a slightly rushed battle then the capture of the Fallen target. We also get to see Brother Annael promoted to a Black Knight and Telemenus of the 5th becoming a member of the 1st Company aka the Deathwing.

The book has it's faults with it's sometimes rushed planet hoping combined with short, choppy and weird dialogue. But for me it was an enjoyable read, it peaked my interest in Dark Angels and I'm wondering where the story is heading, it was also fun to remember the Piscina campaign. Overall a good read. 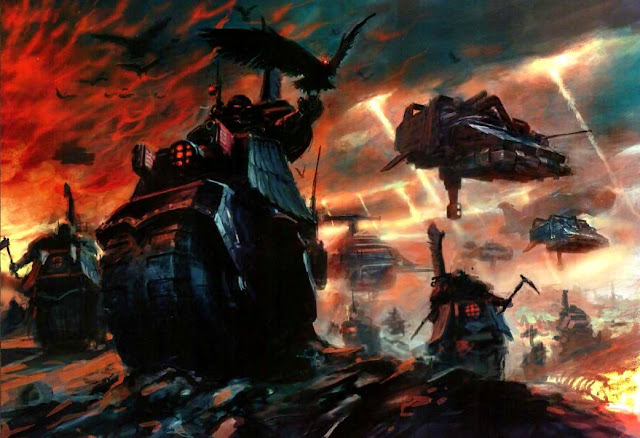 Posted by Adventures with Peps at December 24, 2017