Welcome to readers to another Iyanden update. Once more I enter the fray of the Dire Avenger Shrines following on from the completion of the Sable Helm Shrine. After a quick chat with a local gamer/tournament goer/blogger Fire Breathing Duck, we agreed that there doesn't seem to be much reason to do a full squad of 10 Dire Avengers, especially as I'm mostly a collector as to a gamer. In fact point wise if you do game, you are better off doing two squads of Five DA, then each can benefit from a free Exarch upgrade, both squads can then share a Waveserpent and still have the same fire output, just with extra wounds thanks to the Exarch and his inv. save for extra resilence.. I know it sounds a bit cheesy but it makes sense. So with that in mind I went a repainted some details on five of my original DA's and made them into another shrine. So allow me to introduce the Knights Azure: 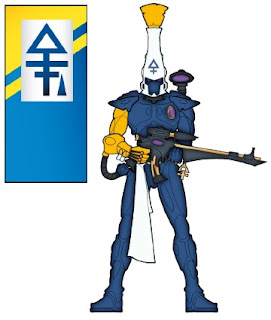 Once again there isn't much detail on them, come on GW get your act together. The only details I can find come from an older edition codex. Knights Azure Shrine is an Eldar Shrine of Dire Avengers (Surprise). They are known for pursuing any sightings of Asurmen. As far as painting goes I picked this to be next shrine as it stands out due to that cool yellow arm. So here I am so far:

As always drop me a comment
Posted by Adventures with Peps at November 20, 2017