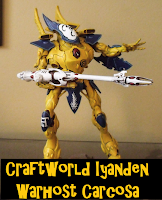 The first Dire Avenger Shrine is now complete. So introducing the Sable Helm Shrine, if you missed the wip posts follow these links part 1, part 2 and part 3. For this Dire Avenger squad I've gone for the full ten man squad lead by an Exarch. The Exarch for this squad is equipped with Dire Sword and Shuriken Pistol- The Classic Combo for a Dire Avenger Exarch. Yes I know it means reduced firepower but I like my conversion so I'm sitting to it :)

As far as Shrine details goes there isn't much on them. They have appeared a few times in different editions of the codex and have appeared in Valdor Warzone Book (hence my first choice for Iyanden), then on Lexicanum they mention that the Sable Helm Shrine  battled the Orks of Waaagh! Greksh on Chogoth Delta and ended up slaughtering the Greenskins. So they seem pretty badass. So here they are in their full squad glory. 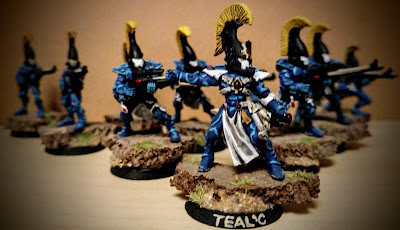 Now with so little background on them that leaves it open for me build off. So on this page I will write my own history for this Shrine and build off it as I manage to get some games in:

Shrine of The Sable Helm

Posted by Adventures with Peps at November 15, 2017