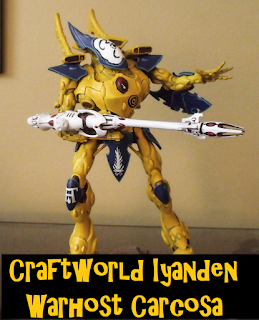 Welcome to the first completed HQ choice of Craftworld Iyanden, Warhost Carcosa for 8th Edition. These spotlight posts will act as a showcase for my latest completed figure along as a source of lore knowledge. So for the first post we hit on Spiritseers. 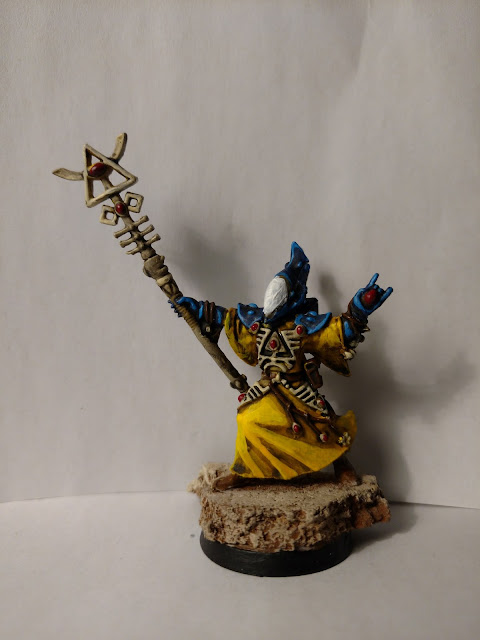 "Spiritseers are specialized Eldar Warlocks. They are experts in summoning and guiding the spirits of the dead into Wraith Constructs, specifically Wraithguard and Wraithlords. It is said that the first Spiritseer was a Farseer of Craftworld Iyanden who mourned the loss of his lover, plunging himself into the Infinity Circuit to be with her. Amid the swirling otherworld of the departed, he found himself able to bridge the gap between the living and the dead.

Of all the Craftworlds, Spiritseers are most common in Iyanden, as this particular Craftworld has a very small population and even fewer warriors. The most powerful Spiritseer among them is Iyanna Arienal, "the Angel of Iyanden", who is doing everything she can to save her home and her people.

The Spiritseers' special training has hardened their own souls against the danger of becoming too enthralled by their command over the dead and thus actually becoming a true necromancer. The use of the Wraithguard and the Wraithlords is only a last resort by the Craftworlds and only when their Farseers believe that they face the direst necessity. The use of such units is seen as little better than engaging in petty necromancy among the Eldar, but is tolerated because the Eldar's low population makes reliance upon their dead a necessity if the race is to survive in its weakened state."

Introducing Assatur of House Ulthanash. Like many of his House he shunned Prince Yriel for his bastard blood believing him to be an arrogant upstart that would doom Iyanden. But following the exiled Princes return to Iyanden to save them all from Hive Fleet Kraken he was forever changed. From a mere Poet to now Speaker of the Dead, Assatur has changed. Gone are his poems of Isha's love now replaced with silence and scorn. Assatur is a true follower of Yriel and can be found leading units of Wraithblades in support of the Eldritch Raiders.

In the closing days of the 41st Millennium, Assatur was amongst the boarding parties that fought the Daemonic legions of Gara'gugul'gor. It was during these actions that Assatur witnessed the death and rebirth of Yriel at the hands of Yvraine, Seeing the power of Ynnead first hand, Assatur has now become a devotee to Ynnead like many from Iyanden and hopes that all this death may one day lead to their rebirth.

"Only through bloodshed and violence can the Aeldari be reborn" - Spiritseer Assatur during the sacking of Hive Zuratha.
Posted by Adventures with Peps at November 13, 2017