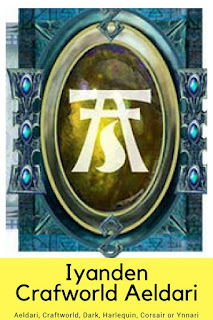 Welcome to the first of many official overviews of Aspect shrines. The plan is collect the official info of an Aspect in one place for all my nerdy needs. Then it will be more accessible via the Dictionary. First up though a bit of self promotion. If you have managed to keep track I have been working on a Dire Avenger Shrine heavily based on the Sable Helms. If you missed it no worries here are the links:

The fourth and final part should be ready soon, using the new codex to work out official points and Power level. 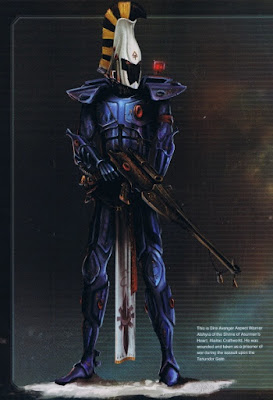 The Dire Avengers trace their lineage back to Asurmen, the first of the Phoenix Lords and founder of the Aspect Shrines. It is because of Asurmen that the Dire Avengers are the most common of the Aspect Warriors, as he founded more Shrines on more Craftworlds than any other Phoenix Lord. The Dire Avengers' signature weapon is the Avenger Shuriken Catapult, a modified version of the typical Shuriken Catapult with an extended barrel, power feed and inbuilt rangefinder. To wield a shuriken is considered an art form by Dire Avengers, who use the deadly weapons in battle to create impenetrable storms of monomolecular blades which slice their enemies to ribbons. Even when a Dire Avenger has removed their armour and left their shrine, they will keep these razor-sharp discs hidden under their clothing, never truly unarmed.

Like other Aspect Warriors, Dire Avengers wear Aspect Armour, psychically activated bodysuits which stiffen on impact to absorb a blow while moulding to fit the warrior's body and allow free range of movement. Dire Avenger armour is predominantly coloured blue, with a distinctive high crested helmet which makes them taller without adding bulk. A tabard is also a common addition, with runic inscriptions identifying the name of the warrior's Shrine and Craftworld of origin, and both it and the helm are always painted in a contrasting white colour. The long top crest is often made of exotic animal hair dyed to match the colour scheme of their Craftworld as well. In addition the small blisters and domes dotting the armour's surface are small compartments containing the suit's technical systems, and over each Dire Avenger's shoulder is an advanced targeter which connects to the Avenger Catapult through the handle. This pan-spectral rangefinder system operates independently of the Dire Avenger and is capable of tracking multiple targets simultaneously, differentiating between friend and foe, and feeding this information directly to the warrior's helm display.

In battle Dire Avengers operate in squads of five to ten warriors, which sometimes includes an Exarch, and can ride into battle within a Wave Serpent transport. These patient, methodical warriors are equally well suited for both offensive and defensive operations. Their training gives them the uncanny ability to read the ebb and flow of battle, knowing when to press the attack or feign retreat and fall back, luring their foes into a carefully prepared ambush. Dire Avengers are also trained in hand-to-hand techniques though, with the exception of their Exarchs, this is not the main focus of their training. When forced to conduct close combat Dire Avengers carry deadly ceremonial knives as a weapon of last resort. These blades are more traditionally used in ceremonies conducted prior to and after battle. Because of their adaptability Dire Avengers are also the most common Aspect Warriors used to conduct special missions outside of normal combat. These can range from recovering an ancient artifact to acting as bodyguards for a Farseer conducting business with the Inquisition. 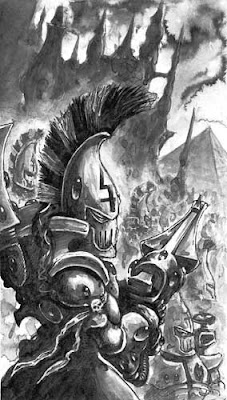 An Exarch is the leader of an Aspect Shrine. He is one that has traveled so far down the Path of the Warrior that he can no longer turn from that path to follow another path. They wear more elaborate and ancient versions of Aspect Armour which contain the souls of past Exarchs, giving the wearer their knowledge and guidance as well as a pool of raw psychic energy.

As befitting their Shrine the Dire Avenger Exarchs are tactically flexible warriors able to conduct their squad in multiple roles. Rather than just one Avenger Catapult, some Exarchs will carry two of these weapons into battle, wielding one in each hand with skillful deadliness. Others will instead focus on their hand-to-hand combat techniques, and carry a combination of either Shuriken Pistol and Diresword or Power Weapon and Shimmershield. Their secret knowledge and supernatural abilities also allow Exarchs and the squads they lead to go beyond normal Aspect training. Under the guidance of their Exarch a Dire Avenger squad can empty their weapons with rapid fire to create a hurricane of deadly blades without loss of accuracy, though their depleted ammunition cores will require reloading. The Exarch can also lead the squad through a series of defensive moves designed to deny attacks of opportunity from opponents engaging them in close combat.

And with that we come to an end. The plan in my life goals is to ultimately end up with a Shrine of each of these Avengers meaning I can have links to their background lore and shiny pictures of my figures- First up will be the Sable Helm Shrine.

As always thanks for checking this out.
Posted by Adventures with Peps at November 11, 2017