Aeldari // Ships of the Fleet and Other Craft 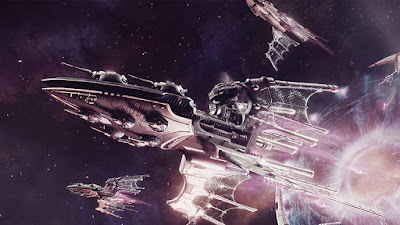 Well on my adventures of chasing down Eldar words, I discovered the motherload via Battlefleet Gothic. So here is my collection of known Eldar ships of the 40K universe. If you have discovered more please let me know in the comments below. 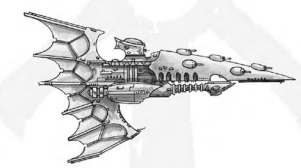 Aconite: They are armoured with an advanced laser Weapons Battery and their speed allows them to circle enemy capital ships and attack them from behind, away from their main defensive weapons systems. They usually operate in groups of three or four ships and can lay down fire equal to that of a battleship's broadside. 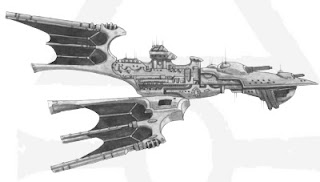 Aurora: The Aurora Class is a class of Eldar light cruiser. Little is known about the cruiser other than it has the normal characteristics of an Eldar vessel, light armour, Holofields, high speed and heavy weaponry. It is said to have the speed of an escort but the weapons of a cruiser.

Darkstar Fighter: They are highly advanced, using technology to provide them with great agility and speed, using some form of inertia-dampener which allows them to turn on the spot. They run on crystal power generators which allows them to operate for longer periods than many other more conventional engine forms used by other races

Dragonship: Cruiser class. It is not a specific design like most other named vessel classes, but rather is a generic name for Eldar vessels of a larger size. The vessels under the name Dragonship have a similar armament and adhere to the same tactics but can be varied within these classes 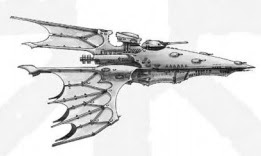 Eclipse: The Eclipse-class Cruiser is a class of Eldar Cruiser that is one of the most effective Attack Craft carriers in the entire Gothic Sector thanks in large part to the quickness and agility that is common to all Eldar craft.

Eagle Bomber: It carries a modified holo field generator to protect it from enemy sensors which distorts the image of the bomber at close range, as well as sonic charges which can blast through the thickest armour. Its targeting systems allow pinpoint accuracy and coupled with the difficulty in hitting them, the Eagle is one of the best bombers in the galaxy

Ghostships: Ghostship does not refer to a particular class of vessel per se, but rather to those Eldar ships whose crews have dwindled over the years to the point where they must be bolstered by Spirit stones. In some cases, a Ghostship will lack living crew altogether, instead of controlled entirely by Spirit stones, often those of its original crew. The presence of these Spirit stones brings a strange sort of sentience to the living wraithbone core from which Eldar ships are built. When combined with a Ghostship's typically tiny crew, this can make Ghostships relatively difficult to damage. Ghostships are not without their problems, however. The same issues that plague Wraithguard and Wraithlords are present in Ghostships to such a degree that a Spiritseer is all but required to guide the ancient spirits that control the ship. The very use of the Spirit stones of long-dead Eldar is also considered abhorrent to the Eldar, and as such, they are only used in times of dire need, as is the case with Craftworld Iyanden. 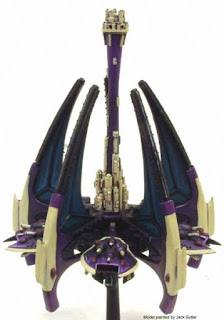 Haven Spire: Haven Spires are home to many Eldar Outcasts, a number of which become corsairs. A Haven Spire is a base from which these Eldar launch their raids and is just one of the identified structures used by the Eldar. They are distinctively Eldar with large solar sails for capturing solar energy and are usually buried deep within asteroid fields or nebulae and have formidable weaponry as well as the corsair fleet. The Imperium is keen to destroy any Haven Spires they come across in the hopes of stopping the pirate activity. 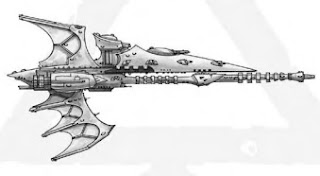 Hellebore: It is the embodiment of Eldar's ideas and technology in that it is a good, all-round vessel that can match the payload of an Imperial light cruiser while maintaining the speed and agility of an escort. They excel at ambushes as their torpedoes can scatter vessels and then their Pulsar Lances and Weapons Battery can take over to destroy stragglers.

Hemlock: It is a very simple design, consisting of a powerful Pulsar Lance and an engine, and little else. It is more of a flying gun than a ship proper. It is likely that the crew numbers are small, the interior power requirements for maintaining an atmosphere would take so much energy as to prevent the use of the warp drive or main weaponry. This makes them easy prey for boarding actions 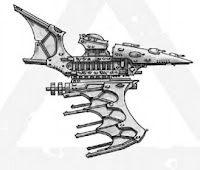 Nightshade Class Destroyer:
It is extremely fast and designed to deploy ordnance close to the enemy before retreating. When coupled with the highly destructive torpedoes used by the Eldar (including neutron or vortex warheads), the Nightshade is basically a weapon which can strike anywhere quickly and at will.

Blades of V'enna-
Storm of Khaine- 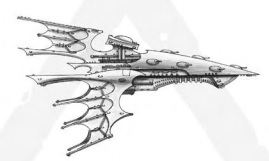 Shadow: A medium class ship with notably large lower wings which denotes an Eldar ship of this class.

Fhianna Rethol- Active during the Gothic War and captured intact after a devastating torpedo attack.
Legacy of Eldanesh- Fought against the Necrons, part of the Alaitoc Fleet.
Shadowblade- Lannanaris' fleet.

Shadowhunter Class Escort: They are the smallest vessels used by Iyanden Craftworld and are likely the smallest in the fleet. They often operate in vast numbers and sit close to the Craftworld itself. They act as patrol vessels and also guide other vessels into the Craftworld but can also operate at a distance that larger vessels would find dangerous when a close defence is necessary.
Anino - House Dathelith 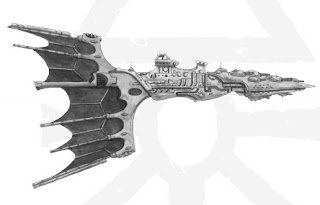 Solaris: A class of Eldar light cruiser. Unfortunately for many captains, it is easily mistaken for the Aurora class and this has led to many tactical mistakes. It has the typical large solar sail at the rear. 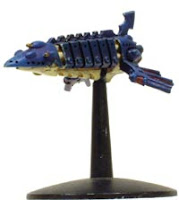 Void Runner: Similar to a venom used to traverse a Craftworld.

Voidstalker: The Void Stalker is one of the largest Eldar space vessels after the Craftworld. It represents the pinnacle of Eldar technology

Auspicious Illumination of Eternity- Flagship of Iyanden destroyed in action against Hive Fleet Naga.
Baricos - Silar Dathelith's Flagship Iyanden.
Blood of Khaine - Captured by Imperial Fist and later destroyed by Iyanden.
Brightstar - Flagship of the Executioners corsair band, was seen throughout the Gothic Sector and concentrated heavily on the Lysades sub-sector.
Forge of Vaul - Gothic War vessel
Manticore - Lannanaris' Flagship.
The misery of Platea -Attacked the Orks of the Cyclops Cluster and was often seen bombarding Ork positions on planets alongside Imperial forces. Rumours abound that the ship was destroyed after single-handedly attempting to destroy a Space Hulk.
Ynnead's Dream - Battleship of Ynnead's followers. 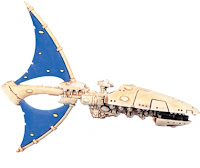 Wraithships: Formed out of pure wraithbone drawn from the warp. The core is forged out of this material and into it is connected all the systems of the ship as well as being psychically attuned to the frequencies used by the Eldar. This psychic connection allows instant communication and turns the ship almost into a living being in its own right.

Glowing Pain:
Daggerwraith: Kabal of the Barbed Eye
Posted by Adventures with Peps at November 10, 2017