Welcome to the first of hopefully many Wednesday WIP posts. First up is Prince Yriel and a squad of Storm Guardians to represent his Eldritch Raiders. Prince Yriel is pretty standard straight out of the box Finecast, given a cork base and is now ready to get painted. Thinking of going against the black suit and doing a more pro-Iyanden paint scheme. Whilst the Storm Guardians are a conversion made from the following kits, Guardian Defenders, Wyches, Helions and Talos. Even though they normally come as a squad of eight, but I plan on giving them a Waveserpent ride so I'm beefing it up to ten men. Load out, I'm keeping them with Aeldari blades instead chainswords my reasons being I would prefer the re-roll to hit rather than the extra attack. The heads on these are my a favourite part, having saved all the blanked masks for them, whilst the flamers come from the Talos kit (some sort of liquid gun) which gives them a bulker meaner look. Then like the rest of the growing army they are given cork basing. I enjoyed making these so much that I might bulk the squad even more to the max size then use the Webway Strategy to get them into the fray a lot quicker. 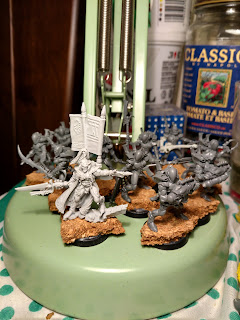 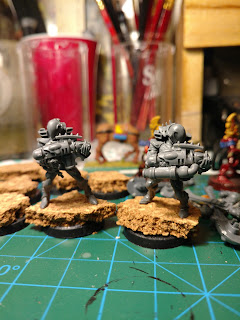 Then up next is my converted Wraithseer, for this I used a standard wraithcannon leftover from my Wraiths along with a Forceshield, opting for this load out so that it is armed with an assault weapon so it can move forward with the wraithguard. The staff is made from the blade of a Talos pain engine, the vane from a falcon kit and the barrel of a brightlance. So here is the results. 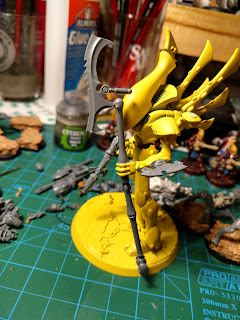 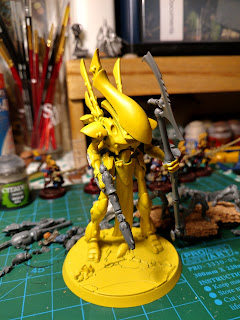 The plan is to hopefully have this all painted by end of week. So wish me luck, would love any possible feedback. Thanks for checking this out.
Posted by Adventures with Peps at November 08, 2017