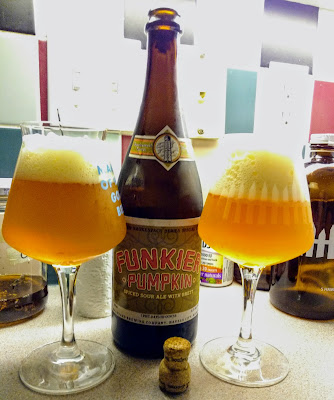 I know, I know, I'm late to the party but whilst visiting a local LCBO I stumbled across a bottle of this and it peaked my interest. Not going to lie the price tag was a bit more than I expected but I was willing to pay it as my wife was also intrigued. So let us jump in and see how we go. 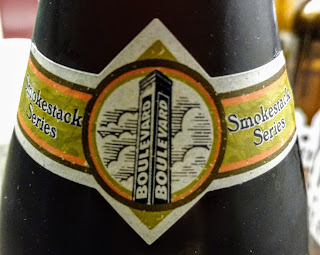 "Pouring a glowing orange/copper color, Funkier Pumpkin leaps from the glass with a rich, pumpkin spice aroma punctuated by funky, forest floor notes from the brettanomyces, a wild yeast strain known for imparting unique flavors and aromas. With an effervescent mouthfeel thanks to spritzy carbonation, the flavor of Funkier Pumpkin features a balanced array of pumpkin pie spices including nutmeg, cinnamon, ginger and allspice. No single spice dominates before giving way to a slight pumpkin flavor that transitions into pleasant, refreshing tartness; a slight warming finish from the cinnamon and ABV and a touch of toasty, toffee-like sweetness from caramel malt." 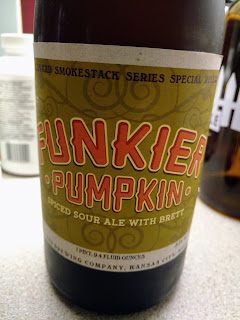 Bottle Art: Pretty standard, looks a bit like a pothead had come with the design but it's fine.

Sight: A light orange or darker gold colour. The beer is lively and pours a super nice crisp head.

Aroma: Tangy, with a big hit pumpkin pie coming from it. Tasted the nutmeg, the cinnamon and the ginger. Smells pretty nice ready to get into this.

Taste: Some sour elements and hints of pumpkin pie spice. Doesn't seem that sour at all the brett just seems to enhance the pumpkin flavours.

Would I buy it again? Nah. It was a good beer and I enjoyed it but I feel one is enough, especially with that price tag. Good for sharing and went down well with our dinner, but that is enough for me.

Have you had it? What did you think? Drop me your thoughts.

Cheers!
Posted by Adventures with Peps at November 30, 2017