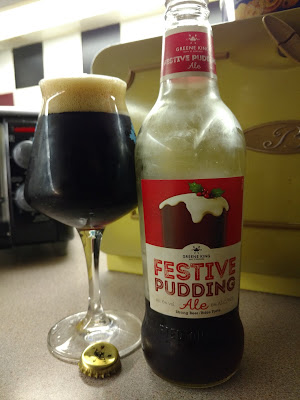 Welcome to the first of properly many festive beers. I know it is still November, but with a surge of Festive beers about to hit I knew I should jump on in straight away. So I was in my local LCBO and saw a beer sporting a Xmas Pudding on it. On closer inspection I discovered it to be by Greene King. Growing up I lived close by to Bury St. Edmunds brewery and best friends dad also works for them. Then as an adult working in bars we also had their IPA or Speckled Hen on tap. You might say they introduced me casks over lagers but they never inspired me like Thornbridge. So let us see if this Xmas Ale can improve my opinion of them.

Commercial Fluff
"A beer like no other, pure Christmas pudding in a glass! We blend our rare oak-aged brew with Pale & Crystal malt & Challenger, First Gold and Target hops to create our rich, warming and satisfying Ale with the masses of toffee, caramel and fruit pudding character. Enjoy with meat & game dishes and rich festive desserts" 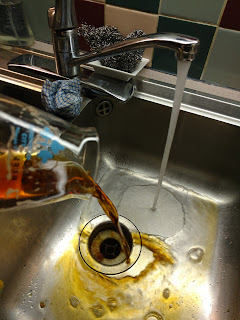 Bottle Art: Closer inspection it's a pretty cheesy label whipped up on MS Paint. Too many types of font being used and the pudding looks just weird.

Sight: Mahogany brown, when held to the light it has a slight red tint on it. Head is a light brown tan colour, looks delicious and tasty.

Aroma: Wow disappointing. Everything seems very tame and pretty muted, there is some malty, caramel, toast and a tiny spice note.

Taste: Also pretty lame. Slight notes of malt, caramel, toast, spices, dark fruits, biscuit and a little bitter. Considering it is 6% it has no heat or booze to it. Overall very thin and disappointing, the taste was so disappointing and lacked any flavour.

Would I buy it again? Nope. Wow just wow that was pointless. It had that Greene King yeast smell which you get in their IPA as well. It lacked punch and flavour, I wanted a rich fruity boozy beer. Instead I got a watered down disaster. After about three or four sips I poured it down the drain. Ultimately a fail.

Posted by Adventures with Peps at November 28, 2017