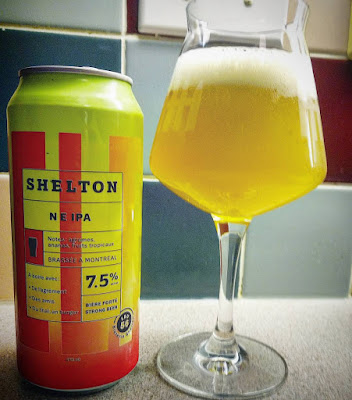 Time for a beer review. Unsurprisingly staying in Quebec for another great tasting beer picked up at Brou ha ha. This beer I knew only a little bit of info before heading in so it was all pretty new to me, so let's get going!

Name: Shelton NEIPA (all the rage at the moment)

Commercial Fluff
"Shelton-NEIPA is an India Pale Ale inspired beer, brewed in New England style. Just as hoppy as the IPA of the American West Coast, its taste is deliberately less bitter and resinous. Velvety and juicy in the mouth, it has powerful aromas of tropical fruits and citrus." 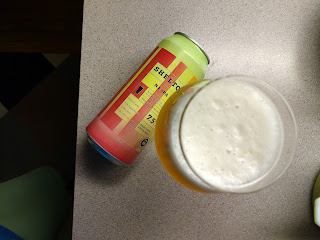 Bottle Art: Bright bold colours, really pops on a shelf and is definitely an eyesore at the same time.

Aroma: Rather citrusy with the malt also coming through.

Taste: Citrusy, fruity, a little resin bitterness that I didn't expect. Nice mouthfeel but didn't make me think of other NEIPA's I've enjoyed.

Would I buy it again? Yes it is a great beer, will need more tinkering with to truly make it a NEIPA, but for now it is a great tasting IPA.

Have you tried it? There was a lot of fuss about this beer when it first launched, which has seemingly died down. I'd be interested in trying some of their other beers. As always drop me a comment and say hi.
Posted by Adventures with Peps at November 16, 2017