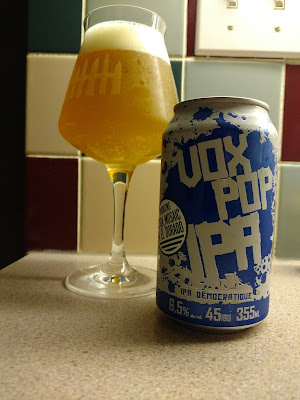 Wow I'm cracking out these beer reviews now. This beer I enjoyed last night and I've been quite the fan of this series too along with the brewery itself. Vox Pop IPA is was designed by it's brewery to be a social media exercise. The public got to vote on what comes next, sometimes it was single hopped other times a mix of hops. The base beer is always the same. What this allows beer drinkers like me to do is experience what the hops taste like and broaden the taste palette. What this ultimately means is that as I review them the Vox Pop list will grow. So let us jump in with the first one:

Commercial Fluff
"Educational and interactive project, this IPA is metamorphosed with each brew to make us discover its aromatic virtues. Come and vote for your favorite hops on our Facebook page.

First brew launched in August 2017; it is the first version with a mixture of hops.

An educational and interactive project, this IPA changes with each batch for the discovery of the aromatic virtues of various hop varietals. Come and vote for your favorite hops on our Facebook page! 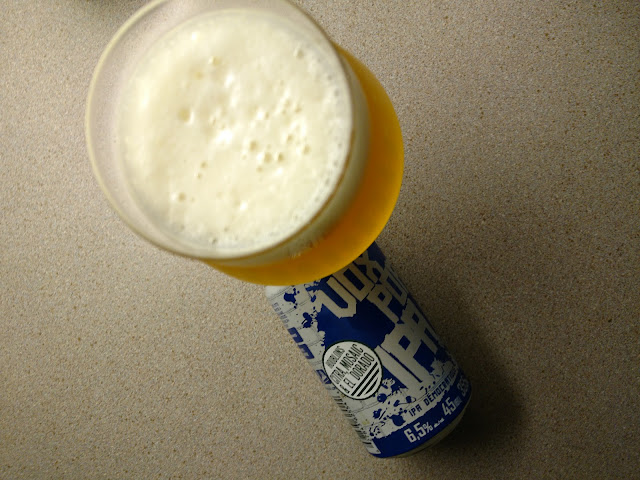 Bottle Art: Nothing fancy this one, a pretty standard 355ml can. To tell what hops are in it you have to look at a small sound label stuck on the can.

Sight: A light golden colour, with a slight murk. Beer forms a pure white cap that hangs around and leaves beautiful lacing as it is drunk.

Aroma: A tropical treat of Orange and Mangos. Also it has a sweetness of some sort of sherbert. The aroma is super tasty.

Taste: Citrus is the dominant flavour profile, lemon, oranges and mango shine through. There is even hints of passionfruit in there. The bitterness hangs on but is in no way overpowering, adding a mouth watering quality to the beer.

Would I buy it again? Yes. This beer could easily be in their main line up, this hop profile line up is great. But I would buy any of this series just to experience the hop profile. So far in this series they have done a lot of single hop cans. So I need to be on the lookout for these.

Have you tried any of these? What are your opinions on these beers? Do you like being exposed to hops in this manner? Let me know below. Thanks for always reading cheers!
Posted by Adventures with Peps at November 10, 2017