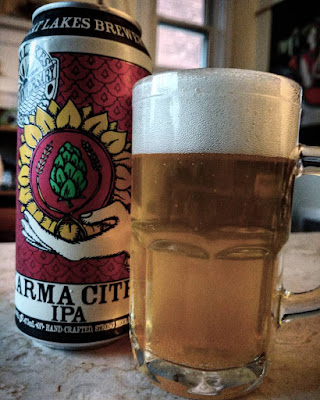 Well there is no escaping Autumn now. The leaves are falling to the ground, Halloween has been and gone and now some stupid stores are already putting up xmas decorations! For myself I love autumn, the air gets crisper and the beer selections darker. That is unless you are after a Great Lakes Brewery beer. These guys love IPA! So it should come as no surprise that their autumn offering is also an IPA, available at most LCBO's this should be an easy find beer if you are from Ontario. So let us jump in: 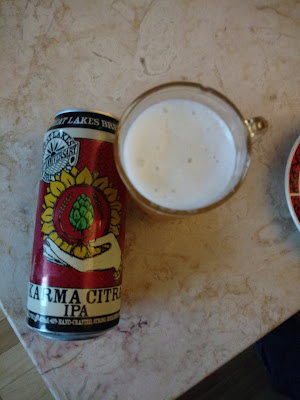 Commercial Fluff
News of any new hop coming from the Yakima Valley perks the ears of IPA brewers everywhere, but, with Citra, things were different. The buzz was bigger. As Citra’s wave rolled across the land from the west coast we waited… and waited. Finally it crested, and a sample crashed into our pilot system. After brewing with it all the buzz made sense. Comments ranged from “Well that changes the game” to “It’s so good it feels like we’re cheating.” Today we procure as much Citra as we can to bring you as much of this IPA as our little brewery can muster. All hail Citra!

Bottle Art: It's bright, it's bold and it stands out on a shelf. Looks like they took some inspiration from Indian art (but the sort the Western World sees as a tourist).

Sight: A golden clear IPA. With a crisp white cap that hangs around and leaves a lovely lacing on the glass.

Aroma: Unsurprisingly a citrus note hits you straight away with a slight sweetness and floral finish.

Taste: Smooth mouthfeel and citrus throughout the beer. Bitterness is there but not overpowering and doesn't linger to much.

Would I buy it again? Yes. It is a delicious easy drinking beer, could happily take a six pack to a house party and drink it all to myself. Is it my favourite GLB beer? No that still belongs to Octopus wants to Fight. But in a season that is dominated dark beers, this can seriously stands out.

What are your thoughts on this beer. Let me know below.

Posted by Adventures with Peps at November 09, 2017