John here with another JDMG update, this time we are dealing with some experimental rules from Mongoose Publishing. This set of rules could originally be found on their blog with some searching, so I am shamelessly copying and pasting here (So I can find them along with others). I hope you enjoy and that these add hours of amusement to your games. If you are from Mongoose and wish for me to take this down (why would you though) please feel free to contact me. 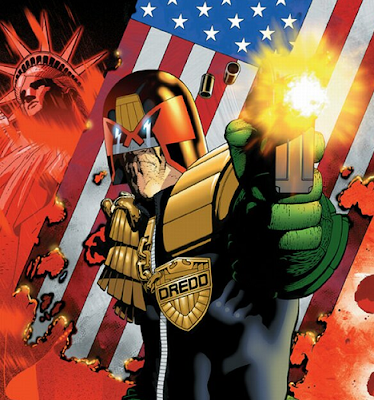 Many forces clash in Mega-City One and in the Cursed Earth beyond the walls, each fighting for their own values, beliefs or because they are just plain mean. However, firefights are rarely simple affairs and there always seems to be something making life harder for the people of Mega-City One.

Random events introduce this unpredictability into your games. They are a series of arbitrary events and occurrences that players can take advantage of or try their best to avoid!

Random Event Triggers
There are certain incidents that can happen during a firefight that may encourage close-by forces, inquisitive perps or fate itself to take an interest in an ongoing battle. For example if very large explosions start going off, you can be sure someone is going to start investigating.

In addition, once per game each player may automatically trigger a random event at the start of any Turn. No die roll is needed, he just need roll on the table below. 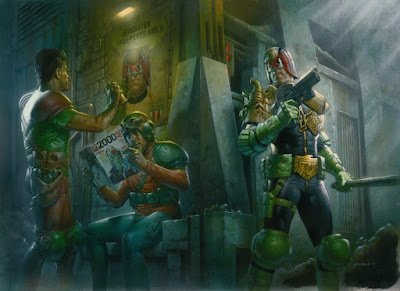 Using Random Events
Many random events use models in addition to those in each player’s force. The following rules are used for all of these extra models, unless otherwise stated.
Deployment

If a random event says a model is moved randomly, both players roll a die at the start of each Turn, re-rolling ties. The highest rolling player will have control of the model for that Turn. At the start of the next Turn, the players roll off against one another again.
Random Model


Sometimes, an event will call for something to happen to a random model in one of the players’ forces. A quick way to resolve this is for both players to roll off against one another, with the loser having the event happen to one of his models. This model can then be selected randomly by a simple die roll, starting with the model at the top of his roster sheet as 1, the next model as 2, and so on. 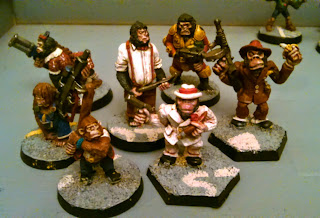 Roll a Dice for Event

Hi Mom!
A vid-reporter from low-rating Channel 5 turns up, drawn to the scene by the sounds of carnage. Hoping for a scoop on the latest violence to befall the city, he starts filming the action. However, he is a distraction for lower ranking members of both forces as they see their chance to fame and fortune!

The vid-reporter (use the rules on page 161 of the main rulebook) is moved randomly. All Minions within 12” of him, in any force, suffer a –2 penalty to all rolls they are called to make except Armour rolls, as they show off in front of the camera. Heroes are unaffected. No Minion is allowed to attack the vid-reporter in any way but Heroes can.

It’s Just Too Much!

Confronted with the realities of life in Mega-City One, one random Minion in one of the forces cracks, and goes Futsie instantly!

The Minion is subject to the Completely Mad! rule on page 154 of the main rulebook. If the Minion survives the battle, the other members of his force manage to calm him down and he is no longer subject to this rule.

Perhaps it was a pool of experimental toxins dropped by a mad scientist, or perhaps a real zombie scrambled out of the ruins and took a bite out of a passer-by. Regardless, a zombie is on the loose, and the contagion is spreading…

One random Minion in one of the forces turns into a zombie, instantly gaining the Dead Flesh and Mindless rules on page 86 of the main rulebook. All other characteristics stay the same but the Minion may no longer perform Shoot actions. The model is now randomly moved. If it removes a hit from a Minion in close combat, that Minion will also turn into a zombie, as detailed above. New zombies are also randomly moved but will never attack another zombie. Minions turned into zombies are dead and may not be recovered at the end of the battle. 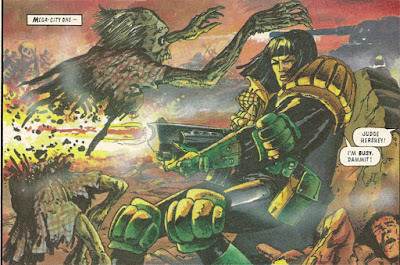 The life of a minion can be hard, and they will never get any of the glory (or rewards) that Heroes take for granted. Most understand that they will never be leaders but a few become insanely jealous of those above them…

One random Minion in one of the forces has harboured his jealousy of a random Hero in his force, and now his hatred is overflowing. If the Minion makes a shooting attack that traces a line to its original target that runs within 2” of the Hero (and the Hero is in range and Line of Sight), the attack will be made against the Hero instead!

The miracle substance has many uses, but none are so thrilling as using the entire city as a pinball table! A Boing® user bounces straight into the battle and then, just as quick, bounces out again!

Both players select one of their own models and roll a die. If either rolls a 1, their model has been struck by the Boing® user (if both roll a 1, both models have been hit – the Boing® fanatic has brought a friend). If neither rolls a 1, both players select another model in each of their forces and roll again. This continues until at least one 1 has been rolled, or all models have been rolled against. If a model is hit by a Boing® attack, it must pass an Agility check or roll a die – it will lose that many Hits. Armour does not protect against Boing®!

So many disasters have befallen Mega-City One over the years, and unexploded ordnance from wars and invasions lies hidden in many sectors, both ruined and otherwise, waiting for the wrong citizen to set it off…

For the rest of the battle, whenever a model is hit by a Blast, Explosive or Power Shot weapon, roll a die. On a 1, the loud noise or sudden explosion detonates a nearby unexploded bomb, shell or charge. This is treated as an Explosive 6 weapon whose Impact Point is centred on the model that was hit by the original attack. The ordnance automatically hits every model in range, dealing Damage 1 with AP+0.

One Shot, One Kill

When two forces go to war, there will always be other rivals interested in affecting the outcome. One of these hidden enemies has mustered enough Credits to send an assassin after someone who is currently fighting and, hopefully, distracted.

One random Hero in one of the forces has had a contract put out on him. An Assassin (see page 58 – the model has Shoot +2, carries a high velocity rifle, and has the Aim and Stealthy Talents) appears in the battle. The model is controlled by the player whose Hero has not been targeted.

There are many breaks in reality within Mega-City One, though most are hidden and extremely difficult to use by beings from any dimension. Unfortunately, the dimensional rift close to this battle is not one of those, and something has come through… 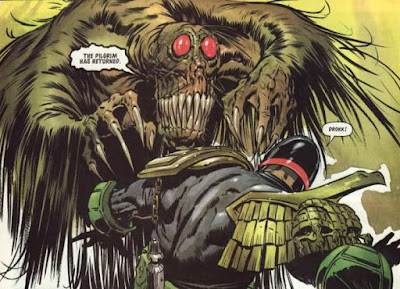 Illegal weapons may be easy to come by in Mega-City One, but they are not always reliable. Even the most fastidious cleaning and care cannot account for the fact that, sometimes, things just go wrong…

Choose a random model in one of the forces. If the model has no shooting weapon, roll again. The next time the model makes a shooting attack, roll a die. On a 1, the weapon explodes, hitting the model once (no need to roll Shooting Dice, just go straight to the Armour roll). In any case, the weapon has been destroyed and must be removed from the force roster. Judges will be able to automatically get a replacement at their Sector House, but everyone else must pay for a new gun…

Sometimes, the strangest things can happen in Mega-City One. Today, someone is going to find out that they are actually an android, and not one that was particularly well put together at that.

One random Minion in one of the forces is actually an android. This would not normally be a problem but this particular model is a bit… twitchy. If the Minion is attacked (either by a shooting or close combat attack) and survives, it must make a Will check. Failure means the Minion goes berserk until the model that attacked it is removed as a casualty or the battle otherwise ends.
A berserk android temporarily gains +2 Hits, +2 Armour and +2 Melee Dice. It may not perform Shooting or Special actions, and must always attempt to move closer to the model that attacked it, using a Melee action if possible. Once the target is removed as a casualty or the battle ends, the Minion android is no longer berserk and loses its temporary characteristic increases (which may result in it being a casualty if it lost Hits while berserk!). However, it may now perform Shoot and Special actions once more.

If the Minion rolls a 1 for its Will check, it explodes. This counts as an Explosive 2 weapon that automatically hits every model in range with Damage 2 and AP-2.
A Minion that discovers it is an android will remain as such for the rest of the campaign, using the rules above!

These random events are intended to be fun and to introduce a little of the chaos of daily life in Mega-City One to your games. They will not usually tilt a game in favour of one force or another, though it is possible – through a combination of bad luck and poor judgement, it is possible that you could lose almost your entire force to a zombie outbreak!

However, so long as you are aware that such things could happen in Mega-City One, you should be able to take them in your stride. Most balanced forces can deal with the worst that can happen on this table and treat them as they are intended – unexpected boons or inconveniences that are all part of life in Mega-City One.

There is, of course, the potential to have a much larger table of random events. Or maybe a whole bunch of tables, tied to specific forces, locations, terrain, and so on. You are very much encouraged to come up with your own and share them on here.

Thanks for reading.
Posted by Adventures with Peps at October 17, 2017