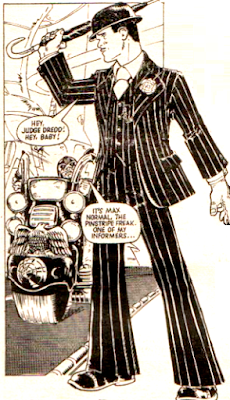 Time for another Character Fact File from the pages of Judge Dredd. This time we explore the life of JD's number one Nark- Max Normal.

Known as 'the Pinstripe Freak', he was once Judge Dredd's most reliable informant, passing on information gathered in his 'day job' playing shuggy (a 22nd century version of billiards - more on this in a later post) for money. Eccentric even by the standards of Mega-City One, Max preferred to distance himself as much as possible from his own era (aside from habitually using bizarre futuristic slang terms) by dressing as a mid-20th century businessman, complete with bowler hat and umbrella.

His refusal to drink anything but Shampagne (real champagne is illegal in Mega-City One) protected him from the Block Mania virus introduced into the city's water supply by Orlok in 2104. He also ceased working for Dredd after he was used as a hostage by criminals attempting to kill the Judge, but was later drawn back into Dredd's life under similar circumstances.

He has since become involved with the schemes of former Judge turned criminal Lenny Zero, whose associate Shuggy Bear runs a shuggy hall which Max frequents. 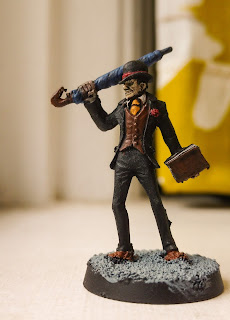 As always thanks for stopping by, next up Rhode Island Red and the Red Leg Raiders.
Posted by Adventures with Peps at October 13, 2017