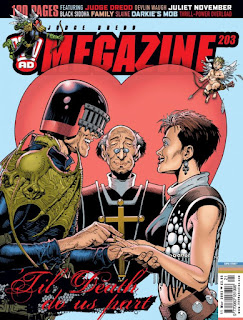 Welcome to the third Meg installment Meg Reviews and it should be no surprise that we are now on issue 203. Released March 11th 2003 with a theme of Valentine (surely to late in March?). So let us dive straight in.

Pretty straight forward start, a boast of 100 pages featuring Judge Dredd, Devlin Waugh, Juliet November, Black Siddha, Family, Slaine and Darkie's Mob. But hang one what is this...Judge Dredd with Cupid wings killing the actual cupid with a bow and arrow. Love it! Whilst the main focus seems to be on a Jimp in a Judge Death costume getting married with the classic tag line: Till Death do us part. I can only assume this is a massive hint to the tale inside so let us move on.

Story: Judge Dredd // The Marriage Game: The tale starts off a MC-1 spin of Blind Date, even has the ginger hostess! In the crowd sit eight known criminals "invited" to watch the live show, in fact it is a bust and Dredd sits in the wings to capture the criminals.
Opinion: Funny tale loved the fact Walter the Robot and Mrs Gunderson were also in the crowd adding their slapstick humor to the plot.

Story: Family // Part 3: The super powered crime families are on the verge of war with each other. To make matters worse someone is trying to get the war started but who is this mystery man?
Opinion: I was originally excited for this series but now three parts in I am starting to lose interest. Hope it swings back round again, time will tell.

Story: Juliet November // Phoenix Falling Part 2: Juliet's first date is not going to plan at all. With a rising body can Juliet control her powers long enough to get out of trouble?
Opinion: Great story that is improving each issue, love the fact that Dredd is now involved too. Excited to see where it goes. 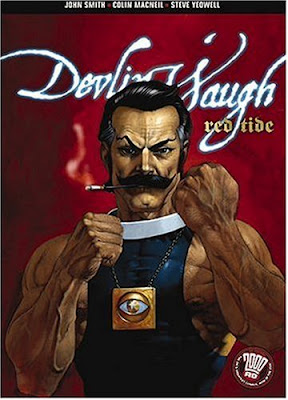 Story: Devlin Waugh // Red Tide Part 2: The boat is under attack and the young Lt. that caught Devlin's eye is dead. Only one thing to do, kill vampires. Devlin and Helsing have to fight their way back to the prisoner and workout an escape plan. The real question is what is safer: The Boat or the sea?
Opinion: Loving everything about this tale the story is fast paced and funny. Whilst the artwork is a joy to see. This piece is worth the cover price alone.

Story: Slaine // Time Killer: Slaine continues his adventure against the Cythrons and I seriously switch off during this.
Opinion: Can't handle these Leysers (lasers) and the complete rip off of Cthulhu creatures in this tale. Swiftly moving on...

Story:  Darkie's Mob: Continuing the WWII adventures as Darkie attempts to lead a rag tag bunch of british soldiers through the war.
Opinion: Love these tales more for reason of childhood memories. It's fun to read and a great social commentary on comics of that era.

Story: Future Shocks // The Collector: Set during a Vietnam War dogfight the American pilots are faced by an unmarked plane. But who could the mystery pilot be.
Opinion: A comically attempt at weird science/mystery tale with a classic plot twist. It hasn't aged well in my opinion.

Story: Sinster Dexter // Dead Famous: They are on a hit. This time after the dead Rock Star Lou Guru, who "died" five years ago. Turns out it was all a stunt to increase sales! But now Guru wants to return but the Manager has other ideas.
Opinion: Nice one page tale, punchy, funny and quick. Perfect.

Out of the nine tales on offer I would say I enjoyed six of them (though Black Siddha was on the edge). The highlight of this issue has to Devlin Waugh, such a charismatic character given a well written story and artwork that really showcases it. Can't wait to read more!

As always thank you for joining me and if you enjoy these segments like, follow or comment to let me know. Cheers.
Posted by Adventures with Peps at October 06, 2017