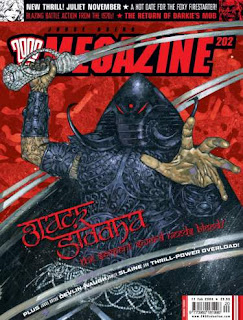 Welcome Dreddheads to Judge Dredd Meg 202. Originally published February 11th 2003, it introduces us to an all new character the "Black Siddha".

A bold striking image greets us on the cover mostly dominated by a black and red colour palette. Showcasing the brand new character Black Siddha, sword raised about to strike and a hand reaching out to grab us. The Black Siddha will be this month's theme, I am excited to meet and learn more about this new character.

The anti-hero for this piece is one Carlito Agarra a.k.a ‘Bato Loco’ or ‘crazy guy’. Somehow bad news follows this guy around like a bad Phartz and let he always seems to come out ahead. In this one off caper, Carlito is hired to grab some diamonds from inside a dead body at the local morgue (yuck!). Unfortunately for Calito, he isn't the only guy after the diamonds. What follows is a few pages of standard comedy involving; chainsaws, shootouts and riding a fat dead body. Ultimately Carlito manages to escape the criminal gangs and Dredd, whilst also getting diamonds.

Opinion: A pretty comical tale if full of farfetched ideas. Makes for a light hearted tale for most part even though it lacks any depths. 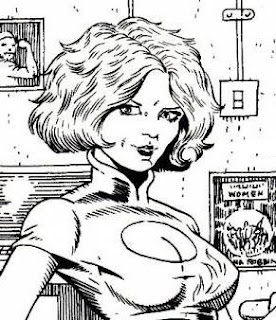 Juliet is a gifted psi and has the ability to set things and people on fire (good start). After being approved as safe for work by the Justice Department, Juliet is going out on her first real date. But can she really control her powers?

Opinion: Fun Mega City One life story. Interested to see where it goes. But I'm very surprised she is allowed to be loose on the streets of MC-1.

Devlin is travelling to the Bahamas with Doctor Helsing (original I know), with them is a vampire prisoner by the name of Lilith (once again very original). Lilith is a scary ass vampire, with the ability to walk in daylight and command others to do her bidding. A poorly timed Vampire attack ruins Devlin's attempts to get in the boats Lieutenant pants. 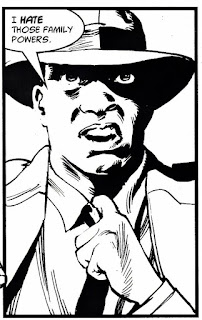 Opinion: The story is heating up, with the boat under attack by a huge wave of vampire. I'm excited to see Devlin in action and can the young Lieutenant survive Devlin's advances?

In this part of the tale we get introduced to more members of the 'Family'. Including the head guy himself and his sons. We also get to find out that as long as they keep the Sicilian bloodline pure ie. two Sicilian parents then the 'Made Men' are born with superpowers. The more pure the bloodline the stronger their abilities are. With this new info, we can now assume the exploding man from part 1 had some of these powers, suggesting he was a powerful Made Man.

Opinion: Really like where this tale is going. With a likeable hero and a selection of quirky mobsters this tale has a real good chance of keeping me hooked, just hope it doesn't go to crazy.

"It's the final age! Earth is under threat by the powers of Darkness and only the Cosmic Knights can save the Earth. One such knight is the Indian hero Mardaka. Master of the world's oldest martial art, and has supernatural powers called siddhis. He is known and feared as Black Siddha."

Opinion: Great introduction story, we get to meet Rohan, the man I can only assume becomes the Black Siddha. We also learn about the demons that will attack Earth and the hero he will one day become. 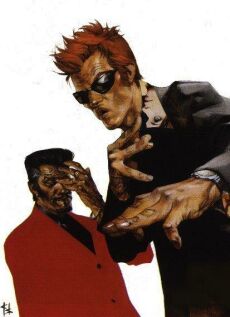 Opinion: A quick short and quirky tale only two pages long. Really sums up the characters style of carrying out their hits. Nice way to finish the meg.

Here endth the normal megazine what comes next are part of a feature called 2000 AD Gold, showcasing older tales by some of the writers and artists of Judge Dredd fame.

A very old Slaine story (I was two at the time of release) with strong ties to Lovecraftian lore. When I say strong, I mean really strong. Worst part of the story is when Slaine uses a Leyser gun! It's basically a laser gun that uses the ley lines of earth to power it.

Opinion: I really did not like this tale. Just so much of it didn't sit well with me. Maybe it's my lack of experience with Slaine. I didn't expect guns and the like. I always thought Slaine was a British version of Conan, but possibly I'm completely wrong. 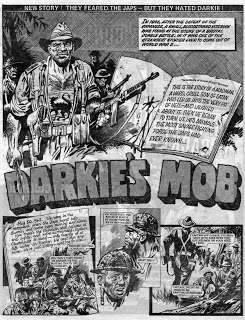 Set during WWII in the Pacific theatre of war. We follow the journal of a Private Richard Shortland, who was to become part of Darkie's Mob. A savage fighting force that scared the living hell out of the Japanese forces.

Opinion: Really enjoyed this story. Reminded me of the comic books I use to buy for 12p at the newsagents. Full of WWII stories and adventures. Great read and it makes me relive my happy childhood memories.

A group of bounty hunters have landed on an alien planet. The plan is to hunt down and capture a renown shape shifter. As the team moves out, they become increasingly more and more jumpy of their surroundings, even killing one of their own number out of paranoia. It's soon decided that this bounty isn't worth the trouble or deaths, so they double back to the ship, But all is not what it seems!

Opinion: This tale made me laugh out loud and is a perfect example of british humour. Need more of this.

This last tale ends the Gold section of the meg. It's always good to see some of the older tales resurface and I would love to see the likes of Outlaw and Armoured Gideon get some of this action too, fingers crossed.

Overall a very enjoyable comic. The Family tale is progressing well, along with Devlin Waugh which seemingly is jumping straight into the action. The Dredd tale and Juliet November were pretty average sadly. A highlight of this meg for me was the introduction to Black Siddha and I'm excited to see where it goes. As to a score I have to give this a 3 out of 5.
Posted by Adventures with Peps at October 04, 2017