Hey we are back again for a comic review! This time it is the turn of 2000 AD Finn Book One. I have fond memories of Finn and was glad to pick up a free copy of Finn Book one. Set in modern day times (I like to still call the 90's Modern Times), Finn is an up to date version of Slaine (who I have a love/hate relationship with). The Tale is written by Pat Mills and Tony Skinner, with artwork from Jim Elston and Kevin Wicks. 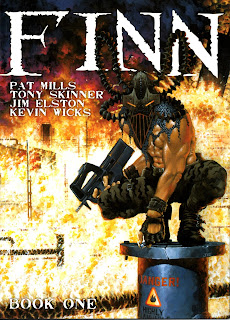 The cover is quite a moody affair, showing Finn squatting on a chemical pipe whilst a fuel refinery burns in the background. This sets the scene perfectly for what I can remember of the tale and fills me with excitement to read it again.

The opening pages show a pagan style ritual going on and we learn of the Newts, an alien race that came to Earth in the primitive days and separated man from nature. We also get introduced to Mandy, the high priestess and Paul who at the end of the ritual becomes Finn the Beast.

Finn's mission is to seek out the Newts and show them the errors of their way. The rest of the opening strip introduces us to the Shining Ones; helpers to the Newt's these creatures are human in form and have manipulated mankind's progress for centuries. Shining Ones are a cruel bunch of monsters who view humans as mere cattle or play toys, to be abused and discarded at a whim. The main two in this opening strip for example, invented Poll Tax (google it kids) and are currently discussing the idea of implanting identity chips into humans.

Now the true story begins. The scene is Plymouth England and Paul (a.k.a Finn) is a taxi driver by day and a White Witch by night. As his day job draws to a close Mandy (the High Priestess), gives Paul the location of the two Shining Ones from the opener and tells him to kill them. At this point Paul dons the beast mask and becomes Finn the beast. Once fully equiped Finn looks like a Paramilitary soldier, his horned helmet comes with a built in gas mask and he also has a few witch tools to play with: like a spiral vine- for focusing magic and climbing, and a Black Dagger- which at this point I have no idea what it does, but it's magical. Soon Finn is face to face with the Shining Ones and is getting his arse kicked! These guys have some crazy powers that let them manipulate humans at a cellular level. Downside to this is that when they power up they can't get too close to each other. This issue Finn uses to his advantage and tricks them into a trap, causing them to touch one another. The resulting effects are very similar to a small nuke, causing the two Shining Ones to explode! After surviving the explosion, Finn slightly worse for wear returns to his car to find a beautiful women inside. This woman turns out to be possessed by Mandy and tells Finn this is just the first step on a path to killing a newt.

The pair then travel to St. Michael's Mount. Where Finn learns this was the site of an ancient battle, between the Newt's Shining Ones and Rebel Shining Ones. As I'm sure you've already guessed it didn't go well for the rebels and after this failure the World belonged to the Newts. The next few pages introduces us to The Free Mariners- The organisation of the ruling Shining Ones, the power that controls the world. During this section we hear about their traditions, like wearing amphibian style feet at meetings and how older members wear fish outfits to look more like the newts. We also get introduced to an Anchorman (a james bond style hitman). His job, to kill Finn. Whilst this has been happening, Finn hasn't been resting. Mandy has decided that Finn will act as bait to lure a Newt out of hiding and the best way to do this is by killing Shining Ones. The book ends on an action packed fight scene, as Finn goes after a higher ranking Shining One and we get to see Finn using some witch magic and a submachine gun to good effect.

The final pages reveal where a Newt lives and sets us up for Book 2.

Overall I loved this comic, always been a big fan of Finn and was sad to find out the character had been retired, due to it being too much competition for Slaine to handle (dumb barbarian!). I'm now in the process of trying to find Book two so watch out for more Finn action. It has also inspired me to attempt to make rules for him in JDMG, so Finn shall return!

As always thank you for taking the time to read these. Please comment below any feedback and hit follow.
Posted by Adventures with Peps at October 15, 2017