Time for a new comic review post. As you may have guessed, I'm currently going through a Judge Dredd phase in my life and I'm completely loving all things Mega City-One. So this time we are visiting a more seeder side of the Big Meg. I welcome you to Lenny Zero. 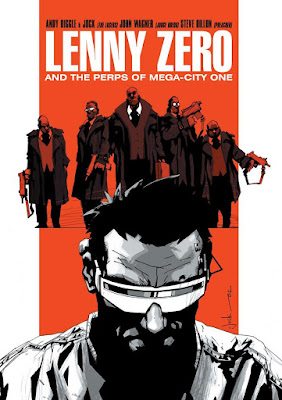 
"It takes a special kind of criminal to survive on the mean streets of Mega-City One. Here are some of the best. Meet Lenny Zero; an ex undercover Judge who's always one step ahead of the game, playing mobsters and the law alike. Slick Dickens, master criminal and style trendsetter is always ahead of the pack. He kills good and looks even better – but can any real person ever be this cool? In the Big Meg’s Barrio Blocks, they call Carlito Agarra the ‘Bato Loco’ or ‘crazy guy’! Carlito is just trying to make a few dishonest creds, but that’s not so easy when both the mob and the judges are always on your back."

The comic starts of with the title character's tale;

Zero has spent the last 15 years working the streets of MC-1. As a Wally Squad Judge, Zero has upheld the law, but sometimes being that close to perps and citizens can rub off on a Judge. In the case of Zero, he has fallen in love and is now looking for a big retirement day payout. As Zero attempts to play mobsters off against Judges, he is drawn into picking sides and can only trust his instincts and that of his lover. Having now betrayed both the Mob and the Judges, Zero is being hunted through the streets and attempts to flee MC-1. He meets his lover at the Spaceport with the stolen money but soon discovers the one person he trusted the most is truly a SJS Judge, attempting to honey trap Zero and prove his corruption.

This is a great character intro story. As it shows a different viewpoint to MC-1, as well as showing how human and fallible a Judge can truly be. Filled with quirky MC-1 mobsters and some great plot twists this tale will leave you guessing and wanting more. 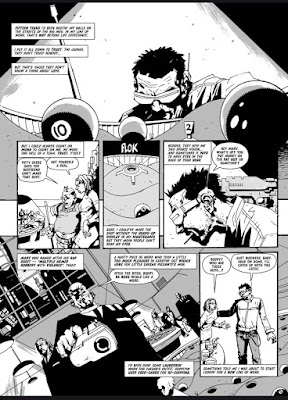 Lenny Zero is dead, found rotten and burnt in a chem pit or so we are meant to believe. In truth Zero is hiding out in a fat suit and calling himself Fatso, whilst he lays low. But this all comes to an abrupt end, when famed bounty hunter Trapper Khan discovers him. Fearing his safety unraveling around him, Zero offers Khan a deal he can't refuse. But the Judges have discovered Zero isn't dead too and set Dredd on his tail to bring him in.

This is an action packed follow up and we get Zero, once again trying to play different sides against each other. We also get to see Dredd in the strip as he joins in the search for Zero. It was really fun watching Zero's plan come together and how easy he can manipulate people.

Lenny Zero is believed dead once again. Blown to pieces attempting to escape Earth with the Bounty Hunter Trapper Khan. But we know better. When a deal goes south and Zero's identity is revealed to Little Caeser. Zero has no choice but to destroy the mobsters empire. Using his Justice department training, hacking skills and trickery, Zero starts to unravel the Little Caeser Empire. Knowing he would be a marked man for life, Zero finally decides to take out Caeser for good.

The final tale of Zero in this book holds no punches. We get to watch Lenny Zero do what his does best! Caeser is soon left reeling as his empire collapses around him and the other Mobs start smelling blood in the water. The best part of this story is the toilet teleporter scene, it is so funny. The tale finishes neat and tidy with the option to continue Zero's tale at a later. Overall a great 3 part tale.

Slick Dickens renown thief and style icon. There is nothing that Slick can't steal and he does it dressed to kill. After completing a robbery Slick is soon chased down by Judge Dredd. In the fight that follows Slick overpowers Dredd and shoots him in the head killing the greatest lawman ever. But not all is as it seems as this is actually from book written by an ISO-Cube inmate.

This story is a classic oldie from Prog 505 and has a comical ending as we find out that the author is nothing like Slick. It even turns out that the author was arresting attempting to carry the crimes he was writing about. After admitting this to Dredd he was then linked to another few crimes, rising his sentence from 5 years to 50! 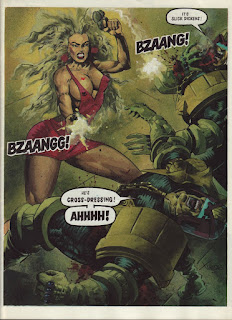 Slick is back and his down his nemesis Dredd. Using an elaborate scheme to escape an ISO-Cube, Slick uses his style and grace to escape the law. With a quick Face and Body change, Slick dressed as a woman once again kills Dredd in a shoot out (a plot point that even Dredd points out as being stupid), before using pixie dust to escape.

Just like the previous tale, this is a story written by a perp in the ISO cells. For me this tale seemed a bit filler. Having only just read the previous story this tale had no surprise ending as you knew it wasn't true. But in the comic time line enough time had past for people to forget the original tale and be surprised by the ending.

Slick on the job

Slick has been hired to killed Dredd (how does Dredd keep coming back?), his payment is the last ever pair of Elton Boots known to exist. Knowing full well the mob the would betray him, Slick tricks a worried Dredd into attacking the Mobs hideout. Whilst this all happens Slick steals the boots and rides off into the sunset.

Once again the tale is written from inside a cell and the poor author is sentenced to another 5 five years for his crime fiction. When will this author learn, highlight of this tale was the artwork. If I'm honest I'm glad Slick is now gone. 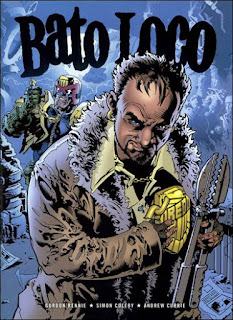 Carlito Agarra the ‘Bato Loco’ or ‘crazy guy’. Somehow bad news follows this guy around and seems to always come out a head. In this caper Carlito is hired to grab some diamonds from inside a dead body at the local morgue. Unfortunately for Calito he isn't the only guy after the diamonds. What follows is a few pages of comedy involving chainsaws, shootout and riding a fat dead body. Ultimately Carlito manages to escape the criminals and Dredd, whilst also getting diamonds.

A pretty comical tale of farfetched ideas. Makes for a light hearted tale even though it lacks any depths.

Carlito is in a tight spot; his girl is demanding that he proposes to her and soon and she is not the kind of girl who you keep waiting. Needing money quick Carlito double crosses some off world aliens to make a quick buck. But his betrayal is soon discovered by the aliens and Carlito becomes a hunted man. His only hope for survival is to turn to his watanabe fiancee, but will she save him without ring?

Another quirky comedy strip, some little quick read which you'll soon forget about. Average at best.

The last of the Bato Loco tales. This time Carlito has been hired to strike a deal with some Organ Leggers. It soon becomes apparent these men are pretty insane and poor Carlito is in over his head. But once again our Bato Loco has the luck of Grud on his side and through a series of accidents, manages to stay alive and escape everyone in one piece.

Highlight of this story is Carlito hit Dredd with a frozen head. But like the other two stories in this series it lacks any real pull to the tales. I wouldn't need to hunt down more stories to learn what happens next, for me these are just filler.

Lee Walker ex-gang member attempting to change his life. But MC-1 has a habit of keeping you down. When Lee returns home he finds his family missing and members of his old gang the Cobra's in their place. If he ever wants to see them again he is going to have to do one last job.....kill the rival gang The Blades.

As the death toll rises Walker gets closer to completing task, but he also gains the attention of Dredd.

This is a solid story of hope, loss and revenge. Was a really good read and highlight for me. It was helped that the art was by Flint, one of my current favourite Dredd artists.

A light hearted tale. A wallscrawl artist is put on community service, cleaning the side of his block with the residence wallcrawler (clean up crew). During his one day shift he experiences; Batgliders, Dog-Vultures and even a block-war! Then just as the day ends, the poor kid realise they are back where they started and tomorrow will have to cover it all again. This breaks the poor kids sanity and he commits another crime preferring the idea of the cubes over this job.

A really funny and cool way to show off life in MC-1. It's a short tale but really shows of the crazy lifestyles of the citizens.

And here ends the book. We are treated to some rough panels of Jock's sketchbook to finish up, mainly showing off Lenny Zero stuff. Overall a good read, a lot of filler stories sadly.

Is it worth the asking price though? Properly not, maybe wait until a sale and treat yourself.


Have you read this comic? What are your thoughts drop me a comment.
Posted by Adventures with Peps at October 13, 2017