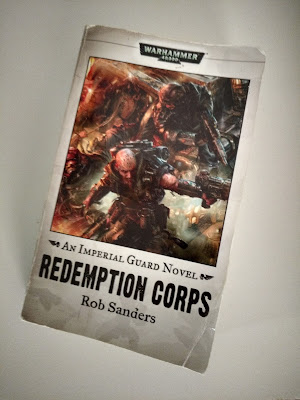 Time for the next Books of 2017. Finally hitting July's installment we are sticking with the theme of Sci-fi and with Games Workshops Black Library collection. With it being the sci-fi arc it could only be Warhammer 40,000, so let us jump straight in:

If you want to catch up with the other books here are the links: Jan, Feb, March, April, May, June.


"Led by the fearsome Major Mortensen, the Redemption Corps is a regiment of ultra-tough storm troopers sent to the deadliest warzones. But can they survive being caught between xenos horrors and the fury of the Sisters of Battle?"

So I got very lucky and found this book in a thrift store. It's been a book that has interested me for a while, as who doesn't love a good guard book? So once home I began reading straight away. Turns out Redemption Corps was the debut novel by Rob Sanders and was his first full novel for Black Library.

The story begins by throwing us straight into the action. With the Redemption Corps on a troopship called 'Deliverance' mid a troop revolt. Tasked by the onboard Commissar, the Corps start moving throughout the ship in search of the head of the revolt. This is an amazing opening chapter full of detail, action and suspense. This chapter alone should have been a short story. Alas it's not. For the rest of the book we jump from the present to the future / the past to the present. This personally unnerves me as a storytelling technique and ultimately left me confusing some of the information along the way.

As the story progress we end up with a system wide battle which involves Orks, Inquisitors and Sisters of Battle. The Redemption Corps are stuck, slap bang in the thick of it for most of the book, fighting from mission to mission slowly uncovering the truth, until being locked up and imprisoned by the Sisters of battle for knowing too much.

Character wise most of them are throw away characters, serving a purpose and then disappearing forever, either by being killed off or just never spoke of again. Only two of the characters are worth remembering, the first being Major Mortensen: Leader of the Redemption Corps, horrifically burned when his planet was destroyed, now able to resist pain, a pure badass, possibly infused with the Emperors essence (if the troopers are to be believed) or a Heretic attempting to start a cult that will worship him (if you believe the Inquisitor or the Sisters). Then the second character is Cadet-Commissar Krieg: An inquisitor's aid sent to spy on Mortensen, straight laced, mission oriented, believes in the goal, slowly sides with the Majors as the story progresses and truth comes out. Neither actually made me want to like them, but they are worth remembering none the less. 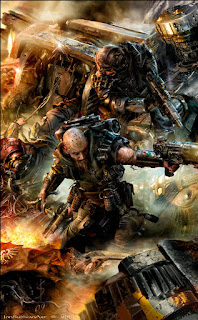 
Ultimately this is an action packed novel, good enough for an afternoon read but lacked some of the interesting aspects I need from a book. I would have preferred it as a bunch of collected short stories rather than the jumping back and forth trying to tell multiple stories at once. For me this book is a 6 out 10.

Thanks for reading this review and if you have any thoughts on it drop me a comment below or better let hit follow!
Posted by Adventures with Peps at October 09, 2017