Hard to believe I've hit number 40 already. So for this one I've picked a weirder beer I've drank recently. The beer in question is a Milkshake IPA, similar to the Blackcurrant one I reviewed from Bicycle Craft. Why this one? Well the label is covered in Cows and made me laugh when I saw it. It's also a brewery I know zero about, hailing from Quebec I did a bit of googling, discovering they primarily do german inspired beers. This could mean one of two things: One- it's going to be bad, stepping out of their comfort zone style wise or Two- could be amazing using their knowledge of original styles to enhance this newer style. But which will it be? Let jump straight in and findout: 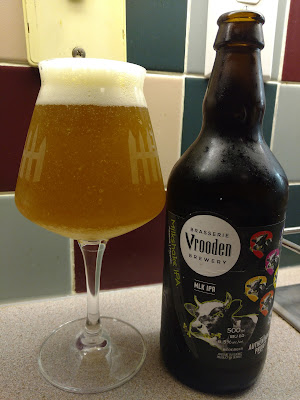 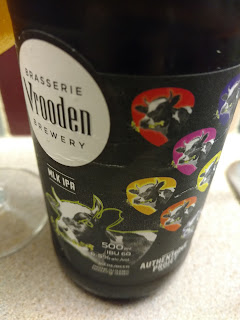 Sight: A cloudy off yellow murk. Full of chunks and floaters. The head is a solid off white that hangs around. At first sight it is not a pretty beer.

Aroma: Sweetness hits you straight away, vanilla adds to this effect, whilst the floral, citrus hops help out the aroma but it reminds me of sweet cheap yoghurts.

Taste: Vanilla overwhelms everything, they really went to town with that flavour. Once your tongue gets use to the vanilla overload the citrus hops start pushing through. Giving hints of lemon and orange. It is a sweet beer meaning I would only ever want the one, but it is a tasty beer.

Would I buy it again? Maybe. I'm very 50/50 on this beer. Plus side it was more interesting than most Milkshake IPA's I have tried. It also delivered on a milk inspired flavour and I was happy to drink it all and enjoyed the after taste. But it had it's errors, which I struggle to forgive and it puts me on the fence. Examples include the particles which could have been cleaned out to help presentation and the vanilla could have reeled back to help the hops shine more. So I really don't know about this one.

Have you had it? Let me know, also let me know if you enjoy Milkshake IPA's in general.

Posted by Adventures with Peps at October 27, 2017