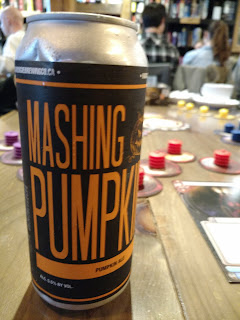 As far as seasonal beers go halloween sucks. We get a surge of these "pumpkin" infused or inspired ales. Which in my opinion always miss the mark, you either get spicebomb beer of cinnamon and clove or you get a sweet drink like a Pumpkin Latte. Neither of which actually showcase the pumpkin. This year if I'm honest I had planned to avoid all Pumpkin beer, but when I saw today's review beer I was drawn to it. So let us jump in: 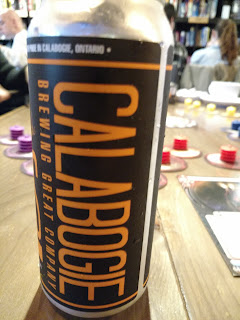 "This beer pours a reddish brown with a big off white head. The nose is cold pumpkin pie and warm spice. The mouthfeel is creamy with a medium to heavy body.  Flavours of raisins, and dark fruit, are balanced with the perfect touch of pumpkin and spice.  The perfect fall and winter warmer. BOO…"

Can Art: Like most of their cans the artwork is simple and to the point which I like. The colour palette screams Halloween and then the little Pumpkin mascot helps push it all home.

Sight: The boardgame cafe glassware was bad hence no pictures. It poured a dark brown with a hint of red if held to a light. A nice white foam of a head appears and hangs around which is nice. 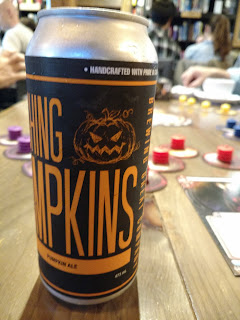 Aroma: Instantly hit by spices you would find in a pumpkin pie. Cinnamon playing a big role once more.

Taste: As it hits the tongue you get that classic cinnamon hit, lucky for this one it's backed up with some darker malt which adds character. It's a very pleasant mouthfeel but I'm not getting pumpkin. What I am getting is a tasty christmas fruit cake.

Would I buy it again? Surprisingly yes.

Hands up I'm not a pumpkin beer fan and thought I would truly struggle with this. I was wrong I actually enjoyed this. I enjoyed it because I couldn't taste pumpkin at all, instead I good a beer with a spicy warmth that reminded me of delicious cakes, full of raisins and spice. Maybe if they changed the name and didn't mention Pumpkins I would have tried it sooner and would be raving about.

What are your thoughts on Pumpkin beer? Is it a hit with you? Am I missing something? As always drop me a comment below and if you are feeling kind please do hit follow.
Posted by Adventures with Peps at October 21, 2017