Came as a bit of a surprise to see a logo from the old country in the LCBO. I had seen Punk IPA on tap in a few places, but had let to see it in a take away format. It now seems LCBO are stocking it regularly (well regularly for them at least). This is a nice change of pace for the LCBO, as their idea of UK beer normally ends at Fullers and Tennents (yawn). So I was genuinely happy when I spied the logo and font of a BrewDog Punk IPA. Hailing from Scotland they have taken the UK beer scene by storm and I almost worked for them just before choosing Canada instead. They have their heads screwed on and believe in making beer that tastes great! They also have a habit of pissing people off and being stubborn which makes me like them more. Punk IPA is their Flagship beer and is the brainchild of Martin Dickie, who once worked for Thornbridge on their Jaipur IPA.

Spoiler Alert:I know already I will like it as I've drunk it many time before including from a cask way, way, way back in the day. So let's jump in! 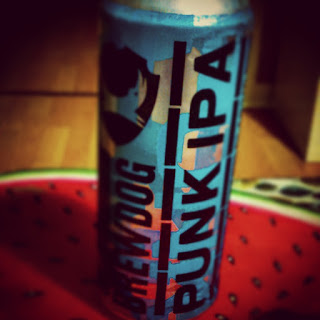 "This fresh, full flavour natural beer is our tribute to the classic IPAs of yester-year. The post modern twist is the addition of amazing fruity hops giving an explosion of tropical fruit flavours and a sharp bitter finish" 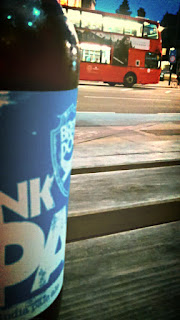 Sight: Pours a slightly hazy orange amber from the can. With a crisp white head that lingers all the way down the glass. A great example of a healthy beer.

Aroma: Big fruity, citrus grapefruit, peach and pine aromas. Backed up with a toffee malt aroma. Have missed this beer and need to go get more.

Taste: Hit of citrus straight away, juicy lemons and oranges zing the tastes buds. This is rounded out by caramel flavours from the malt, washing over them. Quite a strong bitter finish that leaves the mouth dry and wanting more.

Would I buy it again? Hell YES!

Have you tried this beer let? What are your thoughts? Drop me a comment either on here or via twitter: @JohnPepsDay or Instagram: @johnpepsday or hit follow or goggle +1. As always thanks for dropping by.
Posted by Adventures with Peps at October 09, 2017