Welcome back friends time for a little change of  pace, instead of a comic or book review, this time I'm delving into a film review. For the first film that I will attempt chat about I've chosen; The Son of Batman. Why this film? Well I've never watched it before and it's bloody Batman! So let's do this. 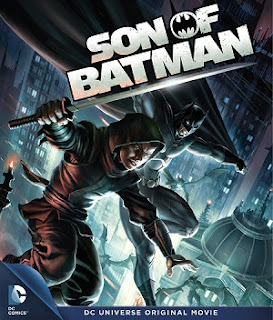 The film starts out at a League of Assassins base camp. Here Ra's al Ghul, Talia al Ghul, Damian and the league are attacked by the main villain of the film Deathstroke!

The League of Assassins (a group of bad ass ninjas) are quickly overpowered by Deathstroke's forces (more highly equipped ninjas) and Ra is killed in the fighting.

Having barely escaped Deathstroke's clutches, Talia needs somewhere safe to hide her son Damian and where better than with his unsuspecting Dad. Here enters the caped crusader Batman. Finding out he is a Dad and has to now guide a wayward son who has a thirst for bloody vengeance. Bruce Wayne finally has a true purpose in life.

The movie then follows a few classic twists and turns involving scientists, Nightwing, mutagenes and Manbats (never fully explains why them). During this time Damian dons the mantle of  Robin and finds his assassin training being questioned by Batman's own moral code. Caught struggling between the two worlds, this ultimately shapes Damian's persona and during the final showdown against Deathstroke he has to chose the path of the League or the way of Batman. 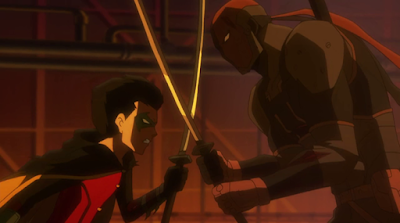 Overall I enjoyed the movie. The story plot moved along at a pleasant pace and it felt well thought out. The fight scenes had a real anime/manga feel to them, which led to an interesting and exciting look about them. As always not everything was great. Damian just came across as a spoiled little shit brat and quite a flat two dimensional character (I thirst for vengeance, now I don't! Wah!) . I also had some issues with the artwork, it sometimes seemed choppy and not as tidy as I've come to expect from DC feature films. It would be fine in a 30 minute tv show, but for a HD film I expected more, maybe that's just me. Also according to the script writers there seems to be killer sharks north of Scotland! WTF?

So how to score it. I'm going to score it three Gangster Gorilla's out of five. 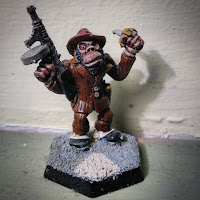 Have you watched it? What are your thought's pro or against Damian Wayne?

Posted by Adventures with Peps at September 17, 2017