What's this another comic review! Not only that but it's lucky 13.... Wonder what topic it could be about?
I know, I know, I'm sorry it is always Dredd. But I just love old stoney face and with such a huge catalogue of work I'm never sort of things to write about. I'm returning to the good old case files and this time delving into Volume 3. 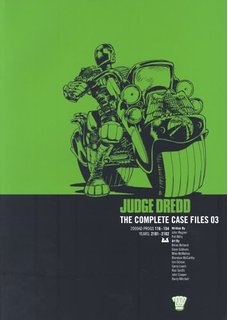 IN THE NAME OF THE LAW!The story of future lawman Judge Dredd continues in this third book collecting together his adventures in chronological order. This bumper volume features many of Dredd's most exciting cases including the first appearance of Judge Death and Psi Judge Anderson and the return of Satanus, first featured in the epic Cursed Earth saga.Featuring the writing talents of comic book legends Pat Mills (Sláine) and John Wagner (A History of Violence), this volume also features the art of Ian Gibson (The Ballad of Halo Jones), Dave Gibbons (Watchmen) and Brian Bolland (Batman: The Killing Joke) amongst many other artists.

The Strips
Highlight of this tale for be was when a perp jumped into what they thought was the laundry chute but turned out to be the garbage grinder! 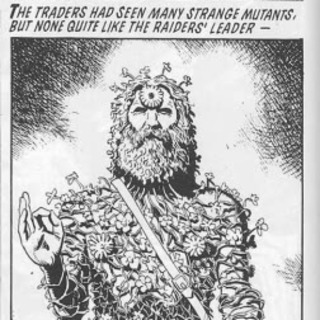 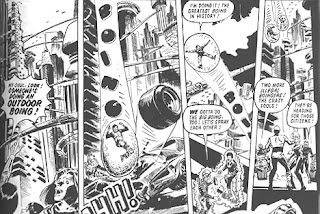 
Ultimately Judge Dredd the Complete Case Files Volume 3, is made up of filler tales. We've gone from multi issue Epics like Cursed Earth and Cal, to one strip wonders. I think what 2000ad was attempting was to show us life in MC-1 and I feel they successed. Most of the tales seemed rushed, but at the same time I enjoyed nearly all of them. Just wish they had maybe given them two issues per story instead of one. Highlights from this volume include: Father Earth, Judge Minty, The Black Plague and Judge Death. But compared to the last volume I have been left wanting longer tales, so I can only score this a 3 out of 5.
Posted by Adventures with Peps at September 20, 2017